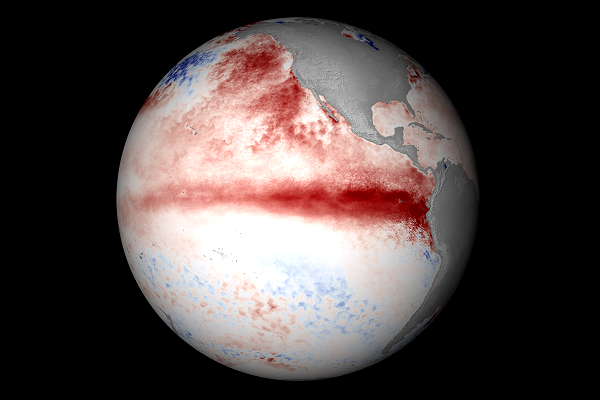 The chances of the current El Niño continuing through the northern-hemisphere autumn are now 99 per cent, with a 95 per cent chance of the tropical Pacific phenomenon persisting to the end of the year, according to scientists at the International Research Institute for Climate and Society (IRI), an IFRC partner organization.

“While the probability calculations are based only on the chance of at least weak El Niño conditions persisting,” they say in their latest monthly briefing, “models are also showing a stronger event compared to [last month].”

However, it was not yet a record-breaking El Niño, and would have to remain at the official “strong” level for a straight month to be classified as such overall.

In terms of impacts, forecasts for the rest of the year were showing typical El Niño signals, including dry conditions over Indonesia, northern South America and parts of Central America and the Caribbean.

There was also a higher chance of dry conditions in West Africa, central China and eastern Australia, with wet conditions more likely in East Africa and the US Central Plains.

The El Niño advisory issued in March by the US National Oceanic and Atmospheric Administration’s (NOAA) Climate Prediction Center and IRI is still in effect.

The Climate Centre’s Senior Climate Specialist Erin Coughlan said the cyclone season, for example, “could certainly be unusual, but it’s hard to know which areas may see more or less cyclones – research on El Niño’s impact on tropical storms is in its infancy.

“Some regions are already looking at contingency plans to deal with El Niño impacts, and we strongly recommend disaster managers stay in touch with their local met service.”

The Washington Post said this week that the current El Niño, “on the cusp of attaining ‘strong’ intensity, has a chance to become the most powerful on record”, with “ripple effects on weather patterns all over the world.”

Pacific sea-surface temperatures on 13–19 July 2015 as a departure from the 1981–2010 average. The Pacific is warming up, and the NOAA Climate Prediction Center expects a “greater than 90 per cent chance” El Niño will continue through the northern winter and probably into next spring. (Image: NOAA)