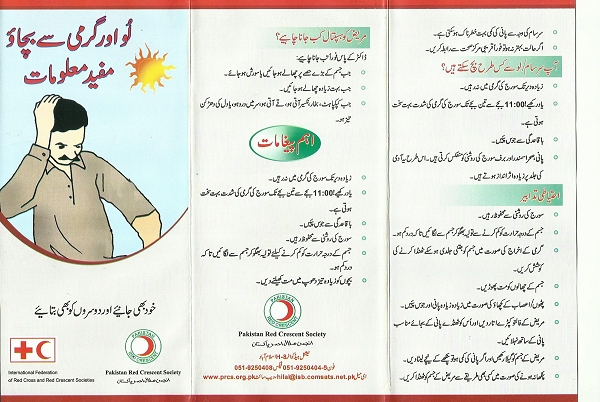 This story (edited slightly here for length) was first published by IRIN last week, as the Sindh branch of the Pakistan Red Crescent Society distributed a public-health brochure on heatstroke and general heath awareness during heatwaves to the public and on Facebook. Meanwhile National Societies are bracing for a heatwave that has already affected North Africa and Western Europe, with temperatures widely above 40C, to spread to northern Europe, including parts of the UK and Scandinavia.

Auto-rickshaw driver Muhammad Khan has witnessed hellish scenes this week on the streets of Karachi as a heatwave claims the lives of the weak and the poor.

As unconscious or dead people are loaded into ambulances, he worries that his children could be next, because his family is too poor to afford a house and lives in a makeshift shelter.

Khan said it was impossible for his family to follow instructions issued by authorities to keep hydrated and stay cool.

“How can we do this when we literally have no roof to live under, no water to drink because of the water shortage in the city, and no electricity because of the constant power cuts, which means even the fan I have rigged up does not turn?” he said.

“Death seems to be hanging over us all the time.”

The majority of the nearly 750 victims to have died so far this week in Pakistan’s main port, financial centre and largest city are either the elderly or poor people with no means of escaping the soaring temperatures.

Since 21 June, temperatures have reached 45 degrees Celsius, even as an electricity shortage has left fans and air conditioners unable to function for hours at a time throughout the city.

The energy crisis has also cut off water supplies in some areas, according to the Karachi Water and Sewerage Board.

Worst affected have been sprawling shantytowns, which are by some estimates home to half the city’s population of about 24 million.

The Edhi Foundation, which is Pakistan’s largest charity and runs a morgue and ambulance service in Karachi, has recorded 744 deaths and its morgue is stretched far over its capacity of 100, said spokesman Anwar Kazmi.

“Those we are picking up from the streets – either in a state of collapse or dead – are often beggars, those who work outdoors all day, drug addicts and persons who get little shelter from the sun,” said Kazmi. “They are the poorest of the poor.”

As Pakistani Prime Minister Nawaz Sharif declared a state of emergency, Ajay Kumar, assistant director at the Provincial National Disaster Management Authority (PDMA), told IRIN that authorities were still counting the number of people who have died and have yet to release a final death toll.

Kumar said the PDMA had ordered district authorities to provide water to at least the most congested areas of Karachi and other towns in Sindh province.

However, Karachi has for years suffered chronic water shortages, and water is often supplied by tankers and sold at black market rates.

Saeed Khan, a doctor at the Jinnah Post Medical Centre, told IRIN that the facility has treated hundreds of people over the past few days for heatstroke and dehydration.

Heatstroke occurs when the body’s temperature rises above 40 degrees, putting vital organs at risk and causing delirium, seizures, and comas.

People become dehydrated when they are subjected to unusually high temperatures for a prolonged period and are unable to maintain a normal body temperature of 37 degrees Celsius. Both conditions can be deadly.

“We have had no patients who would rank among the rich,” said Khan. “These people go from air conditioned houses or at least those cooled by fans backed by rechargeable devices to air conditioned offices and do not walk on the streets or use public transport, so they are much better protected.”

The heatwave has also struck the mostly-Muslim nation during the month of Ramadan, when Muslims fast from sunrise to sunset.

“The largest number of deaths have occurred among the elderly,” said Khan. “They are also most likely to be fasting as the elderly are more pious.”

Religious scholars say Muslims may abstain from fasting under certain conditions, including the risk of sickness or death.

At the same time, societies are getting more vulnerable, with rising proportions of elderly people who often live on their own.

In rapidly growing megacities in developing countries, it's the poor who are being hit hard, often working outdoors with limited supplies of safe drinking water.

But as several big heatwave disasters in Europe have shown, no country is immune.

In the case of the recent Indian and Pakistani heatwaves, however, observations do not show a strong trend in heat extremes in recent decades, despite the growing global risk.

One hypothesis is that the cooling effect of air pollution may be masking a warming signal.

Part of a public-health advice brochure produced by the Sindh branch of the Pakistan Red Crescent Society (PRCS) during the current heatwave emergency that has claimed hundreds of lives. (Image: PRCS)