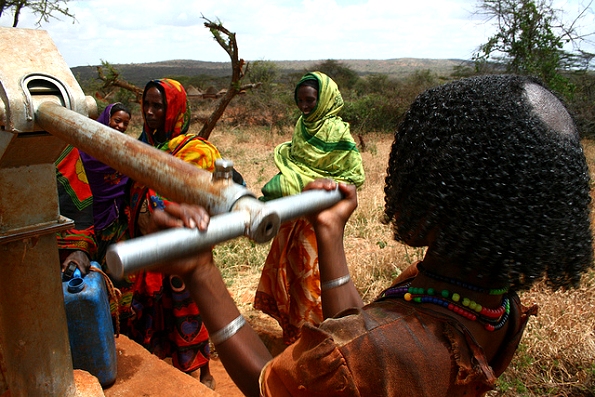 The American Red Cross – one of eight founding partners – and with it the global Red Cross Red Crescent will leverage staff and resources already operating in the initial focus countries of Bangladesh, Colombia and Ethiopia.

By networking communities, civil society, and government agencies, the Red Cross Red Crescent will be help scale up tools and educational games that enhance decision-making, including in “remote, hard-to-reach locations”.

Climate impacts were “particularly damaging in developing countries, which often lack the resources and technical capacity to effectively prepare…and adapt”.

No single entity is capable of addressing the “vast needs for improved climate services in these nations: for everything from projections of future sea-level rise…to maps that overlay population, infrastructure, and climate data to help decision-makers target resources.”

The Climate Services for Resilient Development partnership – announced at the United States Institute for Peace in Washington, DC – will harness the resources of societal actors and institutions, relying on “collaboration between the partners and local stakeholders to ensure long-term ownership and sustainability.”

It will provide climate services including science, data, information, tools, and training to developing countries working to strengthen resilience.

Further details of each partner’s contribution are given in the White House press release announcing the partnership.

US government involvement is led by the US Agency for International Development (USAID) and includes the National Aeronautics and Space Administration, the National Oceanic and Atmospheric Administration, and the US Geological Survey; the Peace Corps will support implementation in some locations.

“At its heart this partnership is about people – saving lives and protecting vulnerable populations,” said Alfonso Lenhardt, USAID Acting Administrator.

The American Red Cross will also work through two relevant global reference centres: the Global Disaster Preparedness Center, which it hosts at its Washington, DC headquarters, and the Red Cross Red Crescent Climate Centre, hosted by the Netherlands Red Cross in The Hague.

The Red Cross component will build on existing work within the IFRC, for example, with the Global Framework for Climate Services, the new UK-supported programme Building Resilience to Climate Extremes and Disasters (known as “BRACED”), the Partners for Resilience alliance, the Global Resilience Partnership, and programmes now deploying the groundbreaking concept of forecast-based financing.

“Red Cross volunteers are at the frontline of rising risks around the world,” said David Melzer, General Counsel and Chief International Officer of the American Red Cross, welcoming the partnership.

“This initiative will help us be smarter and more effective in what we’ve been doing for many years: building resilience and taking early action based on early warnings.”

Climate Centre Director Maarten van Aalst, who was in Washington, DC for the launch, said: “It’s great to see the American Red Cross taking such a prominent role in this partnership, which offers fantastic complementarities among governments, leading science agencies, the private sector and development banks.

“For the Climate Centre it’s also been a privilege supporting the American Red Cross with this agenda, and we look forward to engaging in an exciting partnership, through work on forecast-based financing, for example.”

Climate Services for Resilient Development builds on President Obama’s efforts to “position the United States as the leader in tackling climate change both domestically and abroad,” the White House said today.

The partnership will facilitate the application of technology and scientific expertise as part of the president’s Climate Action Plan to support resilience in developing nations.

The IFRC last year announced its own One Billion Coalition for Resilience – an initiative designed to increase community and civic action on resilience.

A young Ethiopian girl pumps water at a rainwater-harvesting installation built by the IFRC as part of an earlier project to boost climate resilience in Oromiya Region that focused on pastoralist communities suffering years of almost unbroken drought. Ethiopia is again the scene of groundbreaking Red Cross work on “forecast-based financing” of early humanitarian action – and a focus country for the new public-private partnership for developing nations vulnerable to climate impacts, announced in Washington, DC today.
(Library photo: Alex Wynter/IFRC)