The Economist on disaster: ‘forewarned is forearmed’ 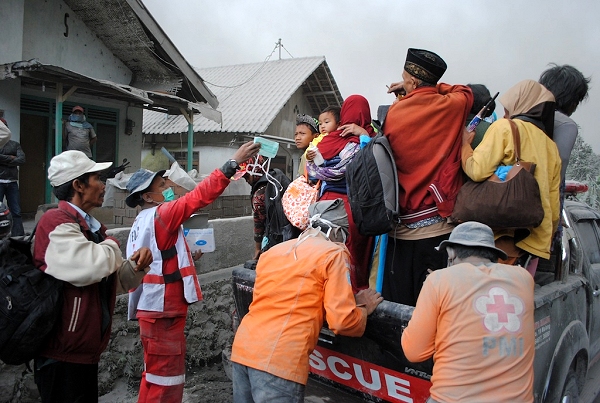 A detailed news briefing on volcanic eruptions and their climate impacts in the current issue of The Economist has acknowledged the importance of Red Cross Red Crescent “vigilance” for advance warning of the human impacts of climate and weather extremes, and the Movement’s role “as an advocate for the people who suffer from them most”.

The 4,000-word briefing, “After Tambora”, tells the story of the eruption exactly 200 years ago in April 1815 of Indonesia’s Mount Tambora volcano and the global catastrophe that followed.

That eruption sent molten rock more than 40 kilometres into the atmosphere and is believed to have been the most powerful in 500 years.

The Economist cites one history that says the number of people killed in ash flows and tsunamis and the starvation that followed them in Indonesia was between 60,000 and 120,000.

The climatic impacts of the eruption of Mount Tambora have been reverse-engineered using computer models. “By the summer of 1816,” the report says, “the world was on average about 1°C cooler than it had been the year before,” an average that hid much larger regional effects.

“The year after the eruption clothes froze to washing lines in the New England summer and glaciers surged down Alpine valleys at an alarming rate,” says the Economist.

“Countless thousands starved in China’s Yunnan province and typhus spread across Europe. Grain was in such short supply in Britain that the Corn Laws were suspended…”

In the modern era, computer models run after the 1991 eruption of Mount Pinatubo in the Philippines but before its climatic effects became fully apparent captured them “reasonably accurately” – if with a tendency to overestimate cooling – and this “is one of the best reasons for thinking that such models capture the workings of the climate quite well.”

What another major volcanic eruption would imply for climate and agriculture worldwide is difficult to say, but the Economist finds two reasons for optimism.

Scientific studies of the aftermath of Mount Pinatubo suggest the world’s plant life gets more productive in the cooler, drier years that follow eruptions, while it’s also possible that some parts of a world stressed by global warming might be cooled.

“Another reason for tempered optimism is that the world would know what was coming,” according to The Economist. (Unlike earthquakes, volcanoes provide some warning.)

“Futures markets would doubtless pay attention. So, one would hope, would governments.”

Forewarned, that is, would be forearmed.

Commenting on the Economist article, Climate Centre Director Maarten van Aalst said: “It’s gratifying to see this welcome acknowledgment of our recent work to understand potential disruptions in the global climate, and to investigate how we can plan ahead and establish early warning systems for the climate impacts of eruptions.”

The magazine reports Dr Van Aalst’s view that the climate impacts of another Tambora might be comparable to those of the big El Niño of 1997–98, which is estimated to have claimed 21,000 lives and caused losses of US$ 36 billion.

A long-standing element in all Climate Centre work is assisting the mainstreaming of operations based on the early warning early action model into Red Cross Red Crescent disaster management.

Country teams working in the Partners for Resilience alliance are now, for example, incorporating both scientific and traditional forecasts into plans for early action, bridging traditional preparedness for response and long-term risk reduction.

Work is also well advanced to couple climate forecasts across timescales with the actual financing of early action via a Climate Centre partnership with the German Red Cross, supported by the German government, for “forecast-based financing”, initially in Togo and Uganda and soon to be extended to several other countries.

When Mount Kelud in East Java finally erupted on 13 February 2014 scientists had been on high alert for more than a week. Humanitarian warnings meant that while seven people died, more than 100,000 were safely evacuated, like the ones pictured being assisted by Indonesian Red Cross volunteers. (Photo: IFRC)