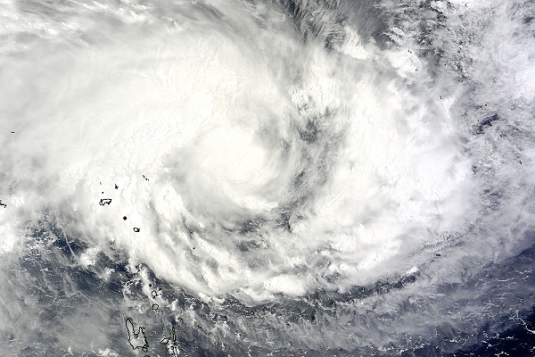 The President of Vanuatu, Baldwin Lonsdale, was “visibly moved”, the UNISDR report said, as he told delegates on Saturday: “I am speaking with you today with a heart that is so heavy. I do not really know what impact Cyclone Pam has left on Vanuatu, as there are no confirmed reports as yet.

“All I can say is that our hope for prospering into the future has been shattered.”

The IFRC immediately allocated more than 130,000 US dollars from its Disaster Relief Emergency Fund to enable the Vanuatu Red Cross Society to respond to the needs of affected communities.

Red Cross teams were over the weekend assessing the impact of Cyclone Pam – a Category 5 with peak winds of 270 kph – after it made landfall in Vanuatu and Tuvalu.

“The priority for everyone is shelter, food, water, and first aid,” said Augustine Garae, Head of Disaster Management for the Vanuatu Red Cross, speaking from the capital, Port Vila.

“We know there has been widespread destruction and many people have lost their homes. But it is taking time to assess the full situation given the communication difficulties.”

The five-day WCDRR conference is mandated by the UN General Assembly to review the 2005–15 Hyogo Framework for Action to make the world safer from natural hazards, and agree a successor for at least the next ten years, known as HFA II.

In the run-up to the Sendai conference, UNISDR published a ten-year review which showed that while 70 per cent of deaths are caused by earthquakes, climate-related disasters now account for 87 per cent of all disaster events and “contribute enormously” to losses and displacement.

In a joint statement released at the end of last week just before Pam struck, IFRC Secretary General Elhadj As Sy, who is in Sendai, and Christiana Figueres, Executive Secretary of the United Nations Framework Convention on Climate Change, said risks from climate change are “on the rise, jeopardizing hard-won development gains and posing formidable challenges…

“Millions of Red Cross and Red Crescent volunteers – from small island states to large urban centres – can testify to this reality, and the…IPCC 5th Assessment Report confirms that the challenge of climate change is unprecedented in human history.

“Overcoming this challenge requires an unprecedented level of cooperation. Climate science shows what the world needs to achieve.”

UN Secretary General Ban Ki-moon told the opening seession of WCDRR: “Annual economic losses from disasters now exceed US$ 300 billion [but] Six billion dollars allocated each year can result in savings of up to US$ 360 billion by 2030.”

“In 2013 there were 192 technological disasters recorded worldwide,” he told the session.

“These hazards are heightened by additional threats to countries’ infrastructure arising from rapid urbanization, as well as the impacts of climate change such as unpredictable weather patterns.”

Maarten van Aalst, Climate Centre Director, who is also in Sendai, said: “Scientists working in the developing field of climate attribution are cautious about associating intense storms such as Pam to global warming.

“But higher local sea levels induced by a global rise in sea levels clearly bring more destructive storm surges, and reported sea swells from Pam of up to five metres in Kiribati and Tuvalu fit that pattern of rising risk.

“It’s still very early days, with the full picture from outer islands far from clear, and Pam has tragically claimed a number of lives. But we may already be able to cautiously suggest that the well-established track record of the Red Cross of investing in community-level early warning early action in Vanuatu has paid humanitarian dividends.”

The Vanuatu Red Cross assisted the authorities in carrying out evacuations across the country, reports over the weekend said, as well as mobilizing volunteers through radio broadcasts conveying important safety measures.

The National Society has 200 active volunteers and a similar number on stand-by.

An IFRC news release last week said that as Pam, Tropical Storm Bavi and Cyclone Nathan made their way across the Pacific, the Red Cross was working with communities and authorities to prepare.

“We could be looking at one of the biggest Pacific responses in recent memory,” said Aurelia Balpe, Pacific Head of Delegation.

Thousands of people in at least nine island states are affected or threatened by the storms.

“It’s timely that world leaders are meeting in Sendai,” Balpe added. “This current situation shows just how much the Pacific region needs investment and support for effective risk reduction…”

The Netherlands Partners for Resilience (PfR), now entering a five-year second phase, has been one of the biggest international programmes implementing resilience at the local level, with over €40m of investment in nine countries since 2011.

The second phase of PfR starts next year with a provisional budget of €50m; it was among Dutch and international partnerships announced in January by the Netherlands Ministry of Foreign Affairs.

A satellite view of Cyclone Pam tearing through the Pacific late last week, triggering what may become one of the biggest humanitarian responses in the region. (Photo: NASA)