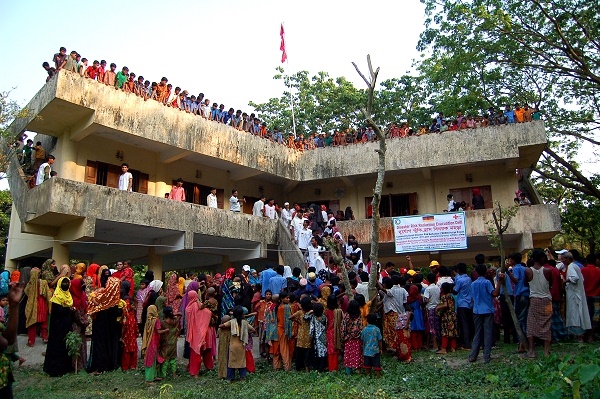 “The need for humanitarian funds and the number of people in need of humanitarian assistance have steadily increased over the past ten years,” says the introduction to the plan (in German on GRC site).

The situation called for innovative solutions so scarce resources could achieve “a more favourable ratio between efforts and outcome.”

Scientists are now able to determine the probability of extreme-weather events for specific regions up to about six months in advance, the German plan argues, and operationalizing this information will improve humanitarian response and strengthen risk reduction in “countries, regions and communities”.

Under the action plan for a new early-warning mechanism, “standard operating procedures” will be activated to reduce risk in the pilot countries in response to scientific forecasts of extreme wea­ther, preparing both communities and local partners for disasters.

The six main points of the German plan, in summary, are these.

A new dialogue platform, under the IFRC’s umbrella, will biannually gather meteorologists, climate scientists, humanitarian actors and donors to work on scientific topics in the humanitarian context, improving the use of weather and climate data.

Welthungerhilfe – one of Germany’s largest non-governmental aid organizations – and the GRC will carry outclimate-risk analyses in the pilot countries, coordinated with the United Nations Office for the Coordination of Humanitarian Affairs (UNOCHA), that will underpin future projects financed by German humanitarian assistance.

New financing mechanisms will continue a “paradigm shift” towards improved preparedness, with the Federal Foreign Office providing not only conventional emergency assistance but also financing based on indicators – allowing humanitarian partners to respond (on, at worst, a “low-regrets” basis) to short- and medium-term and seasonal warnings before disaster strikes.

The results of the Nansen Initiative will be incorporated into the implementation of plan.

Finally, the Foreign Office will continue its efforts to establish an “anticipatory humanitarian system”,emphasizing the humanitarian dimension of climate change and adaptation, intertwined with negoti­ations on risk reduction for the World Conference on Disaster Risk Reduction in Sendai, Japan, next month, and next year’s World Humanitarian Summit in Istanbul.

The GRC, which works with a “multitude of actors” on climate change in a humanitarian context, is coordinating implementation of the action plan, in cooperation with the IFRC and the Climate Centre.

Other important partners are UNOCHA, WFP and the Cli­mate Services Partnership – a network aimed at improving access to and utilization of climate information – which will play an important role in the Geneva-based dialogue platform.

An earlier initiative for forecast-based financing, designed in 2012 for the Togo and Uganda Red Cross, was supported funded by the German Federal Ministry for Economic Cooperation and Development through the GRC, with technical assistance from the Climate Centre.

A 2011 cyclone evacuation drill in Bangladesh, part of a previous project for disaster risk reduction funded by Germany’s Federal Foreign Office. The country is one of at least four that are part of a new German government and Red Cross action planfor “humanitarian adaptation to climate change” centred on forecast-based financing. (Library photo: Thorsten Klose/German Red Cross).