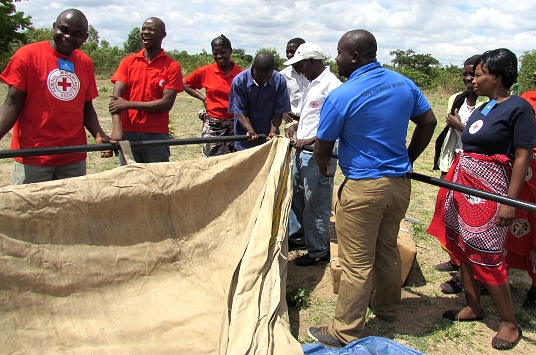 Tens of thousands of people have been forced out of their homes in Malawi, Mozambique and Zimbabwe after floods caused by a deep low-pressure system that crawled across Southern Africa, dumping weeks’ worth of rain in a few hours in places.

In the worst-affected country, Malawi, the authorities said just over 50 people have died and others are missing, more than 20,000 have been forced out of their homes, and around a third of the country – especially the south – has been declared a disaster zone.

The government said it is appealing for urgent international assistance.

The Malawi Red Cross Society (MRCS) says its volunteers and staff have been able to get through to more than 700 houses affected by the floods with emergency-shelter material (tents and tarpaulins), cookware, blankets and mosquito nets.

The MRCS is also involved in search and rescue, and registration and camp management at a site where displaced people have taken refuge in the Southern Region district of Chikwawa, near the country’s second city, Blantyre.

Since mid-December, when heavy seasonal rain began, the MRCS has been involved in disseminating early-warning information from the Malawi Meteorological Service (MMS), which Friday said the low-pressure system continued to shift further eastwards towards Madagascar “reducing moisture inflow into southern Malawi”.

The Malawi military has sent helicopters and boats to rescue people stranded by floodwater in Chikwawa and another Southern Region district, Nsanje – among the worst affected in the country.

Local news reports yesterday quoted Vice-President Saulos Chilima as saying that some 800 people had been rescued from the flooded River Ruo and – Malawi’s biggest – River Shire.

But some 2,500 people were still marooned on patches of high ground, and an unspecified number had declined to be evacuated because they did not want to leave their land, the reports added.

The MMS last year completed a project supported by the Finnish Red Cross and meteorological service and the Climate Centre to make it easier for communities to use weather information from professional meteorologists, and they are also collaborating in the Global Framework for Climate Services.

The IFRC last month issued a grant from its Disaster Relief Emergency Fund (DREF) of nearly 200,000 Swiss francs (US$ 230,000) to help the Zimbabwe Red Cross Society (ZRCS) with immediate needs like clean water, hygiene materials and emergency shelter, initially to some 500 flood-affected families in urgent need.

Heavy seasonal rain over Zimbabwe that intensified from New Year’s Eve triggered severe floods across the country and claimed at least 11 lives.

Meanwhile, Mozambique’s major north-south arterial road was cut Friday after two bridges collapsed in heavy flooding that has killed 25 people and displaced nearly 20,000, according to officials

Parts of the country are also without electricity after torrential rain toppled a number of pylons.

The Mozambique Red Cross – a world leader in early warning early action for at least a decade and a half – is taking part in an inter-agency assessment of the number and needs of flood-affected people.

One news report says at least 15 people in the central province of Zambezia died when the usually placid Licungo River “became a raging torrent in the worst floods this river basin has known since 1971”.

So just how unusual are these intense, if seasonal, rains and floods over Southern Africa, and what role might climate change have played?

“As always, there are challenges with the quality of the data and models, and there’s also variability from one decade to the next that makes attributing extreme rainfall to climate change more difficult,” says Climate Centre Director Maarten van Aalst, who is also a Lead Author for the Intergovernmental Panel on Climate Change (IPCC).

“But a preliminary analysis of climate models and current observations suggests there probably was a climate change component in this extreme-weather episode.

“The big question that the scientists will be looking at over the next few days, weeks and months is: how big a factor could it be?”

Nsanje, Malawi: Red Cross staff and volunteers set up emergency shelter for some of the tens of thousands of people displaced by disastrous seasonal flooding over the past week. (Photo: Malawi Red Cross)