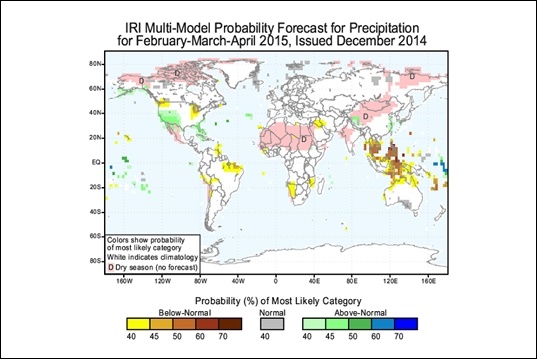 The Pacific Ocean remains primed for an El Niño event, according to the Australian Bureau of Meteorology’s (BOM) annual climate statement released earlier this week, but the atmosphere “has failed to respond in a manner which progresses the climate system into a full El Niño”.

Over the year, Australian rainfall and temperature showed “El Niño-like behaviour”, it adds in a news release, “including warmer and drier conditions in much of eastern Australia, spring heatwaves, and early fire-weather conditions in the south-east.”

Pacific Ocean temperatures had been persistently “above average” for much of the year, but unlike a developing El Niño there were also above-average temperatures across the northern and western Pacific, according to the BOM – possibly explaining the failure of atmospheric circulation to respond as with a full El Niño.

The latest “diagnostic discussion” issued by the US National Weather Service’s Climate Prediction Center, issued yesterday Thursday, continues to give the status of its alert system as “El Niño Watch”.

The agency says a “Watch” applies when “conditions are favourable for the development of El Niño or La Niña conditions within the next six months”.

In its own December climate briefing, the International Research Institute for Climate and Society (IRI) – the IFRC’s forecasting partners – put the chance of an El Niño developing by the end of February at 80 per cent, up slightly from its November forecast.

Sea-surface temperatures had been “above the +0.5ºC threshold” for El Niño, said IRI, but a even a weak El Niño event would only occur if they stayed that way for several months.

And despite some atmospheric indicators consistent with El Niño, cloud and rain in the equatorial Pacific was still “the major [missing] component”.

El Limbo continues says the headline on IRI’s news story about the briefing.

National Society disaster managers are advised to look at the latest prospects for their regions in the IRI-IFRC’s Global Forecast, Total Rain and Snow January–March 2015, just out, as well as monitoring local short-term forecasts.

The current IRI graphic forecast for precipitation worldwide for February to April this year. One forecast “area of concern” is the Pacific, where several small island nations  face an increased likelihood of either an unusually wet or dry season.
(Source: Climate Centre/IRI)