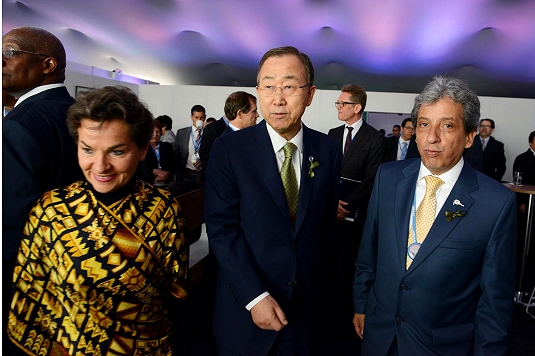 A global agreement on climate change that will harness action by all nations “took a further important step forward” after the annual UN climate talks – COP 20 – held in the Peruvian capital, Lima, according to a press release yesterday from the United Nations Framework Convention on Climate Change (UNFCCC).

Governments ended two weeks of talks by “elaborating the elements of the new agreement” due to be finalized at COP 21 in Paris next year.

They also made “significant progress” with raising adaptation to climate change to the same level as mitigation – the reduction of greenhouse gas emissions – by recognizing that National Adaptation Plans (NAPs) can deliver resilience.

“Lima has given new urgency towards fast tracking adaptation and building resilience across the developing world – not least by strengthening the link to finance and the development of national adaptation plans,” UNFCC quotes the Peruvian Environment Minister and COP 20 President, Manuel Pulgar-Vidal, as saying.

Lima achieved other important outcomes and firsts in the international climate process, according to the UNFCCC, including:

Christiana Figueres, UNFCCC Executive Secretary, said: “Governments arrived in Lima on a wave of positive news and optimism resulting from the climate action announcements of the European Union, China and the United States, to the scaling up of pledges for the Green Climate Fund.

“They leave Lima on a fresh wave of positivity towards Paris with a range of key decisions agreed and action-agendas launched.”

Some observers, however, said many difficult negotiating elements remained unresolved, and the ambition of current commitments seemed too low to prevent dangerous global warming or provide sufficient finance to help the poorest countries adapt and develop sustainably.

Global figures who took part in a high-level panel discussion at the end of the two-day Development and Climate Days (“D&C Days”) earlier called for greater public support for tackling climate change and poverty to galvanize government ambition on three landmark agreements in 2015 on climate, disaster risk reduction and sustainable development.

“The Lima outcome leaves us in better shape than last year,” said Climate Centre Director, Dr Maarten van Aalst, who is also a Lead Author for the latest IPCC assessment report, “but essential aspects on both mitigation and adaptation commitments and monitoring still have to be settled, so we have a busy year ahead of us on the road to the Paris agreement.

“For us in the Red Cross Red Crescent Movement, a key outcome of the Lima COP is the declaration on education and awareness-raising, which dovetails with commitments at the recent UN Climate Summit in New York by IFRC Secretary General Elhadj As Sy.”

Mr As Sy pledged to scale up public awareness and education on changing climate risks by mobilizing 17 million volunteers and 189 National Societies and “systematically communicating to the general public about the role of climate change in major disasters”.

Speaking before the end of COP 20, the IFRC Under Secretary General for Programme Services, Walter Cotte, said climate change poses formidable challenges to the humanitarian community, increasing risks for millions of the world’s most vulnerable people.

“We reiterate our commitment to scaling up actions on adaptation and mitigation,” he said, “aiming to support high-risk communities in at least 40 countries to use climate information to enhance their resilience by the end of 2015.”

In Lima, members of the IFRC delegation participated in many discussions on this topic, including two key side-events.

The highlight of the event, the UN CC:Learn website said later, was a climate risk management game that “involved the entire audience in an active exercise on decision-making.”

Similar games – now key tools for awareness and education – also featured in a side-event organized by Plan and Save the Children and moderated by the Climate Centre’s Associate Director for Research and Innovation, Dr Pablo Suarez, on children in a changing climate.

This session including an interactive game of Snap!, also used in another COP 20 side-event hosted by USAID.

The IFRC and the Climate Centre are increasing support to National Societies around the world for engagement with governments on the formulation of NAPs.

The IFRC delegation in Lima, for example, included Suren Movsisyan, who is the Armenian Red Cross National Network Coordinator for the Austrian Red Cross-supported Climate Forum East project and has been contributing to the Armenian NAP.

In other COP 20 outcomes, emphasizing the increasing importance of NAPs, Peru launched an “NAP global network” – involving itself, Germany, Jamaica, Japan, the Philippines, Togo, the UK and the US – and the Nazca Climate Action Portal to “inject additional momentum into the process through to Paris by demonstrating the wealth of non-state action”.

The governments of Peru and – as the incoming COP Presidency – France launched a “Lima-Paris Action Agenda” to support the 2015 agreement.

“We look forward to working with our Red Cross Red Crescent colleagues in the lead-up to COP 21 for the final round of negotiations on what's clearly a defining humanitarian issue for our age,” said Antoine Peigney, Head of International Operations and Relations at the French Red Cross (FRC).

“The French Red Cross is committed to reducing disaster risks and vulnerabilities by enabling a greater number of people to be prepared, ready to protect themselves while developing partnerships within communities and with public authorities.”

The FRC – host National Society at COP 21, expected to be held at the Parc des Expositions at le Bourget in Paris – was represented in Lima by Maryse Vercoutere, Programme Coordinator for Disaster Risk Reduction, who joined the IFRC observer delegation at the COP 20 meeting.

Christiana Figueres, Executive Secretary of the UN Framework on Climate Change, with (centre) UN Secretary General Ban Ki-moon and Peruvian Environment Minister and COP 20 President, Manuel Pulgar-Vidal, together in the second week of the UN climate talks in Lima. (Photo: UNFCCC via Flickr)