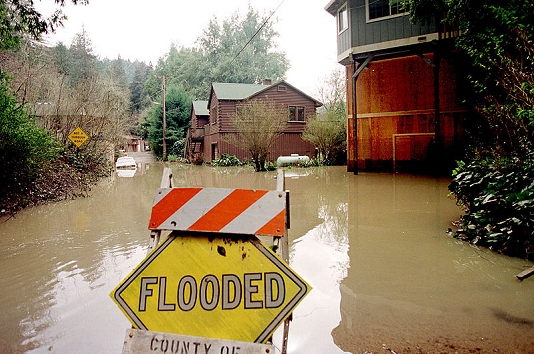 (This article was first published by Climate Central on 20 October 2014.)

The phantom El Niño continues to hold sway over the weather and climate world, in part because it has such a strong influence on weather patterns around the globe. But the weather it influences isn’t the end of the story or even the biggest point. What really matters is how those shifts can lead to flooding or drought.

A new study looks at those downstream effects of flooding in particular and finds that nearly half of the world’s land areas experience a shift in the odds of flooding during El Niño (or it’s opposite phase, La Niña).

That means some areas are exposed to higher flood risks, endangering infrastructure and people, while other areas get a reprieve. Those findings, published Monday in the Proceedings of the National Academy of Sciences, provide a more detailed look at the next level of forecasting.

“A lot of scientific effort has been put into modelling physical hazards themselves. Only much more recently have we started looking at the damage and being able to model that damage,” said Philip Ward, a researcher at Amsterdam Global Change Institute who led the new study.

Ward and his colleagues found that 44 per cent of river basins around the world saw changes in 100-year flood risks during El Niño or La Niña years, with some seeing higher risk of floods and loss of property and some seeing lower risk.

The south-west US, parts of southern South America and the Horn of Africa saw some of the biggest increases in flooding risks while the West Coast, Sahel region of Africa and Australia saw the biggest decreases.

Those patterns reflect the broad changes El Niño, known more fully as El Niño-Southern Oscillation or ENSO, generally causes to precipitation patterns globally. The warming of water in the eastern equatorial Pacific that characterizes El Niño tends to shift the odds of precipitation in certain places around the globe, though it by no means guarantees it.

“There have been studies (showing) that some areas get more rainfall during El Niño years, but more rainfall doesn’t necessarily mean more floods. So we’re looking at the actual flooding and damages caused by flooding,” Ward said.

The flood risks Ward modelled are roughly in line with those precipitation shifts, but they don’t always line up. For example, the south-east US is generally wet and cool during El Niño, but Ward’s study found that although the odds of flooding were increased in some parts of the region, the impact of flooding across the region as a whole was minimal.

You can think of this process like subbing in a speedy pinch-runner in baseball. The pinch-runner may up the odds of being able to steal a base safely but there’s no guarantee they’ll be able to, let alone eventually be able to score a run.

The reason? A lot of factors have to line up for more rains to lead to more floods to actual impacts on society. Flood protection levels, which the study did not consider, and the amount of people living in flood plains as well as other factors further influence the impact flooding can have.

The study provides crucial context for El Niño for the insurance industry, disaster managers and even local communities.

“We’ve been discussing these results with them for re-insurance (purposes),” Ward said. “You can imagine what this study shows to them that the portfolio of risk is not constant through time. There may be some years where they may have a higher risk and more payouts.”

Moving from seasonal rainfall forecasts to on-the-ground impacts is also something the Red Cross is studying. Maarten van Aalst, who heads the Red Cross Red Crescent Climate Centre, said some humanitarian efforts have already used seasonal forecasts to successfully plan for the disasters, with the most notable example being advanced preparation for major floods in West Africa in 2008.

Using a seasonal forecast to pre-position supplies helped the Red Cross cut down response time to just 2 days from 40 days and costs 30 per cent less than responding after floods hit.

“This paper demonstrates quantitatively what we have felt intuitively for several years: humanitarian action can be improved by making better use of seasonal climate forecasts,” Van Aalst said in an email.

“Anything that brings us closer to the real impacts that people experience on the ground (floods rather than rainfall) can lead to better thresholds and sharper planning.”

Ward also emphasized that beyond these opportunities, the study showed that some locations around the world can actually benefit from reduced flood risks during El Niño or La Niña years. Of course in locations that badly need rain, such as parts of northern California, that’s of small consolation with this year’s impending El Niño.

Beyond the here and now, the findings could take on importance in a changing climate. Some research has indicated that climate change could double the likelihood of “super” El Niños like those that formed in 1982–83 and 1997–98.

The 1997–98 El Niño was responsible for an estimated US$ 35–45 billion in damage and 23,000 deaths worldwide. Any shift in El Niño patterns could lead to larger variability in flood risks around the globe.

“The paper provides strong evidence that ENSO-related factors need to be studied and mapped to flood risk across the world. Such an effort would lend potential predictability to flood risk, and permit better local flood risk planning as well as portfolio risk management across many locations,” said Upmanu Lall, the head of the Columbia University Water Center and reviewer of the paper prior to publication.

Lall cautioned that more work needed to be done, though, before the paper’s findings could be turned into actionable forecasts.

Russian River, California floods during the 1998 El Niño, responsible for US$ 35–45 billion in damage and 23,000 deaths worldwide. The south-west US, parts of southern South America and the Horn of Africa saw some of the biggest increases in flooding risks, while the US West Coast, the Sahel region of Africa, and Australia saw the biggest decreases. (Library photo: Dave Gatley/Federal Emergency Management Agency)