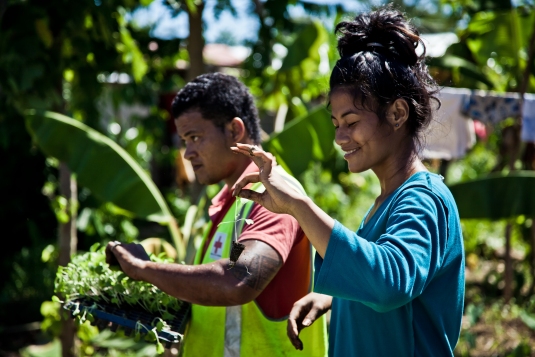 This year, World Disasters Report takes on a challenging theme as it questions why culture is not a central consideration in disaster risk reduction efforts, and how disasters and risk influence culture.

Disaster risk and recovery projects are less effective if they do not take into account how culture affects the way people relate to risk, says World Disasters Report 2014, Focus on culture and risk – released today by the International Federation of Red Cross and Red Crescent Societies (IFRC).

The report asks, for example, what should be done when people blame a flood on an angry goddess (River Kosi, India, in 2008) or a volcanic eruption on a mountain god (Mount Merapi, Indonesia).

After the tsunami in 2004, many people in Aceh, Indonesia, believed that it was a form of divine retribution for allowing tourism or drilling for oil.

Similar beliefs were widespread in the United States during Hurricane Katrina when some believed it showed God’s displeasure with some of the behaviours of the people who live in or visit New Orleans.

More recently, the Ebola outbreak in West Africa demonstrates that all efforts to stop the deadly disease will be in vain if we do not address misperceptions and cultural beliefs through effective social mobilization and behavioural change.

‘We must get this right’

With climate change increasing the number of people at risk and the frequency and/or severity of climate hazards, the World Disasters Report 2014 is advocating a new approach which takes into account how people and institutions think, behave and act in relation to risk.

“The one thing that is certain is that we will have poorly sustained impact if we do not adequately take into account people’s cultures, beliefs and attitudes in relation to risk, and if we do not build on local knowledge,” said Elhadj As Sy, IFRC Secretary General.

“Climate change is leading to damaged livelihoods and increased vulnerabilities. Natural hazards are also becoming more frequent and extreme. We must get this right; we must include cultural considerations in disaster risk reduction.”

People’s own priorities often include the need to live in high risk environments, because that is where they can gain their livelihoods.

Hundreds of millions of people live in dangerous places, including the sides of volcanoes, earthquake fault zones and coasts exposed to storms and tsunamis that provide valuable livelihood opportunities.

Valley and volcanic soils are very fertile, coasts are good for fishing and farming and fault zones in arid areas often have associated water supplies.

Disaster risk reduction approaches must recognize why people are living with risks and how their behaviour and attitudes related to culture affect their exposure and sensitivity to hazards.

To reduce these risks it is essential to focus on how livelihoods can be made more robust and safer, and where necessary be replaced.

Sometimes these do not coincide with the expectations of public health interventions, and it is important to understand the cultural difference that may affect success.

The report is also released at a critical time as the Hyogo Framework for Action –  Building the Resilience of Nations and Communities to Disasters – will expire in 2015.

“But the issues of culture and local knowledge matter now more than ever, as both hazards and vulnerability are affected by climate change.

“The resulting stresses on social, physical and economic systems are shifting the world into a new era of risk.”

In 2013, floods accounted for 44 per cent of deaths caused by natural hazards, and storms 41 per cent. The most severe were Typhoon Haiyan in the Philippines, which affected 16 million people, and Cyclone Phailin in India with 13 million affected.

The number of people killed by technological disasters is also 26 per cent below the decade’s average. A total of 6,711 were reported killed in 2013, compared to the decade average of 7,594.

The event that resulted in the highest number of deaths was the collapse of a textile factory building in Bangladesh which killed 1,127 people.

Afega community, Samoa: The Red Cross is running a project creating vegetable gardens where people are taught horticulture and are provided with fertilizer and seeds. The small island nations of the Pacific are among the most vulnerable to the impacts of climate change anywhere in he world, and in Samoa rising sea levels and storms are affecting agriculture. This picture appears in World Disasters Report 2014 from the IFRC. (Photo: Benoit Matsha Carpentier/IFRC)