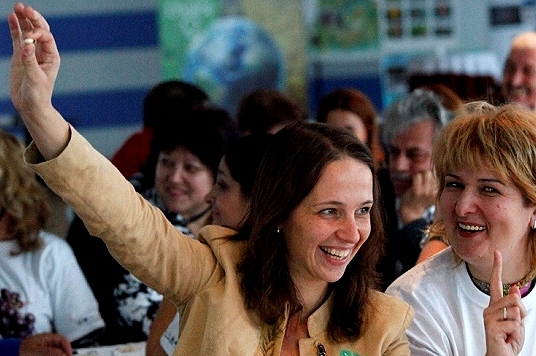 Participants at the final conference of the Climate Forum East project, in the Belarus capital Minsk last week, were disconcerted to find at the end of the first day that their backs were covered with tick-shaped stickers bearing the ominous warning, “You won’t notice a tick bite as you haven’t noticed this sticker”.

Meanwhile, volunteers dressed as polar bears were handing out discount vouchers for early action on climate adaptation, and a “pantomime” of fruit and vegetables heralded the impacts of climate change on agriculture.

These initiatives were part of a mini-advocacy campaign competition that kicked off the conference and encouraged NGOs to develop innovative ways to present their messages to decision-makers.

The stickers were designed by the Belarus Red Cross to draw attention to the increasing risk of tick-borne diseases associated with warmer temperatures.

“This was a great idea which came from our youth volunteers and we’ve used these stickers to raise awareness in every part of Belarus,” said the BRC’s Tatsiana Lukashevich.

The conference – Towards joint action on climate change in Eastern Partnership countries – centred on lessons learned from the experience of the two-year Climate Forum East project, coordinated by the Austrian Red Cross.

The project focused on building the capacity of civil society in Armenia, Azerbaijan, Belarus, Georgia, Moldova and Ukraine to engage with the policy-making process on climate change and environmental governance.

Participants also discussed how to build on their successes and take activities forward, with sessions devoted to local-level adaptation, climate funding, biodiversity, and climate change and public health.

Ina Vachiberidze, an environmental health expert from Georgia who ran the session on climate change and public health, said: “All six countries have similar public-health structures and are facing similar health challenges from climate change, especially higher temperatures and heatwaves.

“It’s really important to develop a common approach towards these issues.”

Games were a key part of many conference sessions. Participants role-played climate change negotiations, took part in a climate adaptation challenge board game, and played Paying for predictions – a Climate Centre game on the cost, value and use of early warnings.

Olga Vlasuk of the National Ecological Centre of Ukraine agreed that games were a good way to get people’s attention: “They are really useful for making people see a different point of view and can be played with a huge range of people from schoolchildren to politicians.

“Paying for predictions really made me think about the costs of disaster preparedness and response.”

Natalia Gozak from the WWF Danube Carpathian Programme reflected on the overall impact of the project. “It was great to work on this project with so many different countries and organizations with different approaches,” she said.

“In the end I think we could make a real difference to the way civil society thinks about climate change adaptation in the region.”

Climate Forum East got underway in January last year and ends in December. It was  funded by the EU, the Austrian Red Cross, the Austrian Development Agency and WWF.

Other international partners include the Environment Agency Austria, the WWF International Danube Carpathian Programme and the Climate Centre.

Participants at the final conference of the Climate Forum East project in Minsk pointed up rising health challenges of a warming world. (Photo: Belarus Red Cross)