Ebola and climate impacts in Africa: Is there a link? 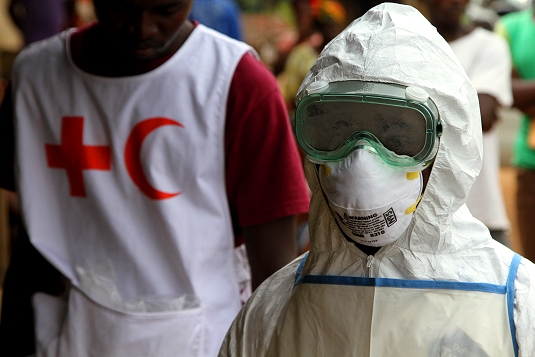 For the first time in its history, the United Nations has created an international mission for a public-health emergency.

The UN Mission for Ebola Emergency Response (UNMEER) “will bring together the vast resources of UN agencies, funds and programmes, to reinforce WHO’s technical expertise and experience,” according to a press release on Friday from the World Health Organization in Geneva; its hub will be in Accra, the Ghanaian capital.

The appeals and DREFs, together worth US$ 3.6m, are supporting operations to assist some 32 million people.

With the outbreak showing no sign of abating, some are asking: Is there a link to climate change in Africa, and possibly deforestation?

Ebola is a zoonotic disease, one that spreads to humans from infected animals; through the consumption of bush meat – wild animals caught in often-declining forests, for example.

Last month’s report in Newsweek magazine – Ebola and Climate Change: Are Humans Responsible for the Severity of the Current Outbreak? – recalled research showing that poor communities suffer most from climate impacts, a widely accepted hypothesis.

“As we see more incursion into the forest [by people], we might see more exposure to Ebola,” Newsweek quoted Dr Stephen Morse, an infectious disease and epidemiology expert at Columbia University, as saying.

“But it’s unclear whether there would be a net positive or net negative.”

Dr Morse told the magazine that what was needed was “nuanced microclimate analyses”of the African regions that have been affected in the past.

Other media, like the EcoWatch news website – Ebola and Climate Change: How Are They Connected? – recalled earlier research suggesting a possible link between Ebola and climate change.

A 2008 report from the Wildlife Conservation Society had said that Ebola was one of a “deadly dozen” pathogens that “may spread as a result of changing temperatures and precipitation levels”.

EcoWatch also quoted a 2006 study in Transactions of the Royal Society of Tropical Medicine and Hygiene as saying that Ebola “would be more frequent with global warming due to its intermittent connection to wildlife and climate”.

Climate Centre Director, Dr Maarten van Aalst, said this weekend: “What many of these headlines, including ours, have in common is that, quite rightly, they end in a question mark.

“We don’t know nearly enough to assert a firm link between climate change and the deadly Ebola virus, but nor is it inconceivable – perhaps via another factor like disruption to forests – and more research in this field is clearly needed.”

Dr Madeleine Christine Thomson, Senior Research Scientist at the International Research Institute for Climate and Society, who has lived in West Africa, says the war in Sierra Leone is “much more likely to have impacted on how people live in forested zones” than climate.

“What Ebola does point to,” she argues, “is the need for strong surveillance and response systems in which information on climate and environment may play an important role, and governments and the international community must prioritize systems which rapidly bring together all the relevant data.”

Other scientists have said poverty, cultural factors and poor public-health infrastructure are more important than any climate connection with Ebola.

Links between other diseases and climate impacts can, however, be more readily evidenced and used to guide practical action on the ground.

A Climate Centre study published earlier this month looks in detail at outcomes from the ground-breaking IFRC project, Health Risk Management in a Changing Climate.

This project selected two diseases that involve interactions between climate and health: diarrhoeal disease in Kenya and Tanzania and dengue fever in Indonesia and Vietnam.

Dengue fever – transmitted to humans by mosquitoes that thrive in hot, wet conditions – has increased dramatically in recent decades; diarrhoeal disease is related to rainfall, floods and droughts, which increase the chance of people’s water sources getting contaminated.

The new study reports that the project provided good evidence that “climate information and considerations can be readily integrated into health programming to account for changing risks, using existing disease prevention techniques”.

IFRC Secretary General Elhadj As Sy told this month’s first-ever global conference on climate and health that climate change “creates and exacerbates” challenges for the humanitarian community, stressing that the burden of actions taken in response “should not fall on communities”.

Arguing that for public health, climate change is the “defining issue of the 21st century,” WHO Director-General Dr Margaret Chan blogged on the Huffington Post last week that “climate change, and all of its dire consequences for health, should be at centre-stage, right now, whenever talks turns to the future of human civilizations”.

Kailahun district, Sierra Leone. The Red Cross was asked by the government to take over managing the bodies of people who have died in the current Ebola outbreak. The task includes preparing the body itself, disinfecting houses, and burial. Volunteers also advise residents on how to protect themselves from Ebola and prevent its spread. (Photo: Katherine Mueller/IFRC)