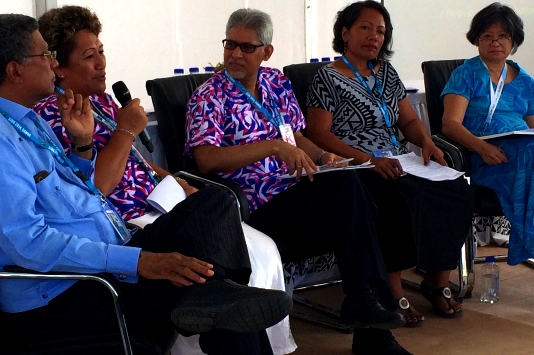 The IFRC and the Secretariat of the Pacific Regional Environment Programme (SPREP) today signed a historic partnership agreement that aims to improve the way weather and climate information is delivered, understood and acted on by communities living with the everyday impacts of climate change.

The three-year “Letter of Agreement” was signed at the SPREP headquarters in the Samoan capital, Apia, by Jagan Chapagain, Director of the IFRC’s Asia Pacific zone and David Sheppard, Director General of SPREP.

“This agreement embodies the goal of this year’s SIDS conference which is about the need to form genuine and durable partnerships for the sustainable development of SIDS,” said Mr Sheppard.

“It is about strengthening community resilience by making climate and weather information relevant to the needs of communities living on the frontline of climate change.

“The Red Cross network allows us to engage with fishers, farmers and villagers on main and outer islands, who depend on weather and climate information for their livelihoods.”

The Finnish-Pacific FINPAC project is funded by the Finnish government and administered by SPREP.

The IFRC and SPREP are collaborating to implement the community-based component of the project which involves the creation of partnerships between national meteorological services and Red Cross National Societies in ten Pacific nations.

They will work with local communities and villages to develop early-warning systems and improve dialogue between disaster managers, meteorological services and end-users of weather and climate information.

“Communities can dramatically reduce the risks they are exposed to by having a better understanding of climate change and climate variability including El Niño and La Niña and extreme-weather events such as cyclones and tides,” said Jagan Chapagain.

“This is vital if we are to strengthen disaster preparedness and response at the local level.”

The project has already been initiated in Tuvalu and the Cook Islands. In both locations, consultations have taken place in partner communities as well as training in understanding weather and climate.

The communities have identified their priority early warning needs and created their own action plans to reduce the risks they face.

On the island of Aitutaki in the Cook Islands, for example, the Tautu village disaster committee that has been formed will help their community monitor, prepare, respond and recover from disasters.

The area is regularly hit by cyclones, and the committee will motivate the community to take action and take measures to ensure their health and safety such as alert neighbours, evacuate schools and prepare their houses for extreme winds.

Tala Mauala, Secretary General of the Samoan Red Cross, shares her experience of the tsunami that hit Samoa in 2009, speaking at a side-event on disaster law organized by the IFRC at the SIDS conference in Samoa. (Photo: Patrick Fuller/IFRC)