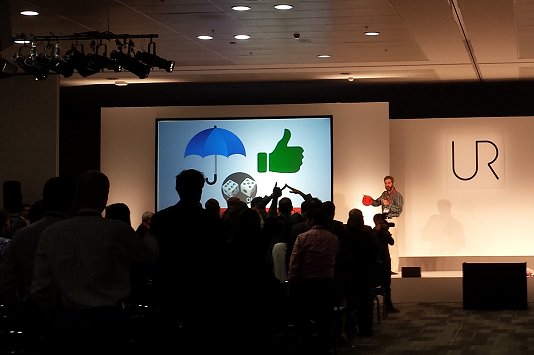 The biennial forum of Understanding Risk (UR), whose theme was “producing actionable information”, ended at University College London today, after bringing together around 900 people for intensive meetings throughout the week.

The UR community comprises practitioners in the assessment of disaster risk –  from government and multilateral agencies, the private sector, research institutions and universities, community-based organizations and civil society.

The IFRC secretariat, several National Societies and the Climate Centre participated in a wide range of sessions on climate, flood and urban issues, focusing on making risk information actionable at scale.

The IFRC and American and British Red Cross jointly ran a technical session on how digital technology might strengthen urban resilience, as part of “a groundbreaking, global initiative that will challenge our peers and other stakeholders to think differently about the humanitarian applications of technology.”

Mohammed Mukhier, who heads the IFRC’s Community Preparedness and Risk Reduction Department, joined other specialist experts from institutions such as Zurich Insurance, Practical Action, the International Institute for Applied Systems Analysis and the Wharton School in a session on ways of measuring resilience to floods.

Numerous conceptual frameworks have been proposed, according to an abstract, but there is “a clear gap in translating them into quantifiable resilience indicators embedded in a participatory community-led process.”

Likewise, many countries do not have adequate tools for the efficient management of flood risk and lack the resources to limit the impacts of floods.

The Climate Centre hosted an interactive session on the new concept of “forecast-based financing”, currently being piloted in Togo and Uganda with the German Red Cross (GRC) and funded by the GRC and the German Federal Ministry for Economic Cooperation and Development.

Kenya Red Cross Deputy Secretary General James Kisia spoke of the range of actions that could be undertaken to prevent human suffering ahead of a potential disaster – in the 2011 crisis in the Horn of Africa, for example – but also emphasized the lack of international funding for such activities.

After intense interest in an over-subscribed session on forecast-based financing, the Climate Centre laid on an extra round of “exploring the complexity of actionable information through gaming” at short notice for the Wednesday lunchbreak.

“Mission impossible?” Using global flood risk assessments for local decision-making was the title of a session where Climate Centre Director Maarten van Aalst spoke on on the potential use of global flood models for early warning early action.

On Friday Dr van Aalst was among 25 experts from academia and multilateral organizations who met to discuss the relationship between the governance of disaster risk and earth systems.

The principal organizer of the UR forums is the Global Facility for Disaster Reduction and Recovery – a partnership, managed by the World Bank, of nearly 50 countries and international organizations committed to helping developing countries reduce vulnerability to natural hazards and adapt to climate change.

UR Forums “are the only meetings that bring the real commanding heights of technology, risk finance and public policy together in one place – not just to talk about theory but to see in practice how tools and techniques are being applied on the ground,” according to Rowan Douglas of Willis Re, a leading international insurance company, speaking after the 2012 event.

“They provide an invaluable opportunity to build bridges between science, practice and policy – not only to engage with state-of-the-art science and technology, but also to take concrete steps towards implementation,” said Dr van Aalst, speaking this week.

Pablo Suarez demonstrates the benefits of participatory climate-risk games to an audience at the 2014 UR Forum. (Photo: Erin Coughlan/Climate Centre)