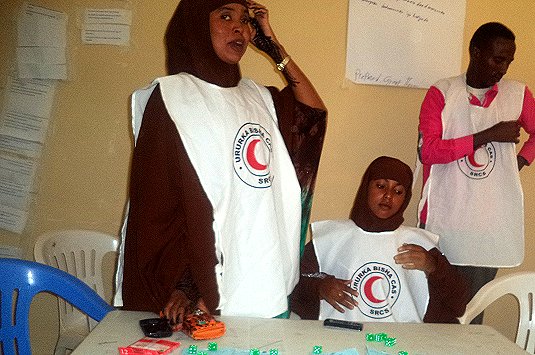 Resources from the Climate Centre’s Climate Training Kit were rolled out for the first time in the Horn of Africa last month in the form of workshops for participatory games – part of a Somali Red Crescent Society (SRCS) community-resilience project supported by the Canadian, German and Norwegian Red Cross.

SRCS team in Somaliland was trained to run games in six regions of Somaliland – nearly half the total – with a view to them now “trickling down” into remote rural communities.

At least 130 people from played Ready! and Before the storm at the regional sessions. They included SRCS Somaliland staff and volunteers, community members, and officials from the National Environment Research and Disaster Preparedness Management Authority (NERAD).

NERAD describes its mandate as empowering Somaliland institutions to effectively respond to disasters “to reduce the vulnerability of communities and minimize loss of lives and property”.

Participants in the workshops saw that the participatory games could refine the actions of communities in response to specific warnings, and generally cope in their own local contexts with available resources.

It also became clearer which actions to scale up under certain scenarios, and who can best do what to reduce the impact of disasters.

The games highlighted the importance of networking, helped to clarify stakeholders’ roles in early warning, early action operations, and showed how local early-action mechanisms can be refined.

Women SRCS personnel played a full part in the workshops (photo), scoring maximum points individually during Before the storm.

One more highlight of the games was the way they reflected the importance – in the Horn of Africa – of clan-based social protection and networking, especially when communities find themselves on the edge of survival.

The game unearthed interesting facts about how farmers and pastoralists react in times of reduced rainfall.

There is very little in the way of professional forecasting available, and the games showed how, if they get a glimpse of a probability of a poor rainy seasons, people can deploy established contingencies rather than just reactively accept loss of livelihoods.

Players came up with a variety of strategies for when drought looms: selling livestock, moving, stopping animal reproduction, management of pasture, sending elderly relatives to other areas, stockpiling water, dry foods, seed and fodder, seeking support from external actors, and – last but not least – asking God for forgiveness.

Offering practical solutions even under challenging circumstances, the Somali Red Crescent is helping communities cope with these changing risks.

SRCS Somaliland team members said they were now excited to run the games in remote villages. Two more games, Dodging the storm and a special game for pastoralists using forecasts to plan the use of grazing, will now be played in Somaliland regions, and provide input to community-based disaster management.

Members of the SRCS Somaliland team who were trained as a core group to run games sessions in six regions. At least 130 people played Ready!and Before the storm, including SRCS Somaliland staff and volunteers, community members, and disaster management officials. (Photo: Atta Muhammad Murtaza Durrani/Climate Centre)