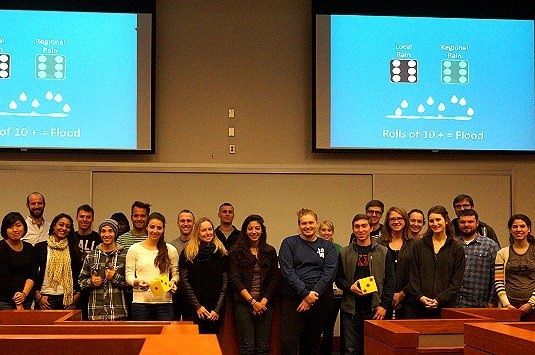 In this game, players are put in the shoes of Red Cross Red Crescent workers who must decide when to prepare for a potential disaster based on probabilistic information, and how much they are willing to pay for certain risk mitigation advantages to prepare their districts.

The environmental risk changes throughout the game, so students are given a realistic view of individual and collective decision-making within climate-based risk reduction.

More than 20 students participated in the Paying for predictions session, facilitated by Michael Mann, Assistant Professor of Geography at GWU.

Before the game, students were asked to think about the possible challenges one might encounter with forecast-based risk scenarios.

Emphasis was placed on the uncertainty of these forecasts: sometimes climate forecasts are complex and hard to interpret.

There is always the possibility of preparing for a potential disaster and no disaster happens; or, on the other hand, failing to prepare and one occurs.

At certain points throughout the game, each team had to decide an amount they were collectively willing to pay for advantages to protect their country from environmental risk.

By the end, five out of the eight teams had invested in risk mitigation strategies, including the winning team.

Each team reported that the ability to obtain a forecast was the biggest advantage; the teams who did not invest in forecast availability said that they would be willing to pay more in the future.

Some teams, however, had invested too much in these mitigation strategies which put them in a position where they could not afford to prepare for a disaster, although they had an idea when one was on the way.

The winning strategy involved optimizing disaster preparation with moderate cost (and a little bit of luck).

Later this spring, Environmental Hazards students will be putting their risk reduction and climate change knowledge to action during the Open Street Mapathon, an event held by the Department of Geography in collaboration with the U.S. Agency for International Development, the Red Cross and the World Bank.

Over 100 students will be attending this event, both undergraduate and graduate, to assist these organizations in mapping vulnerable communities in the Philippines.