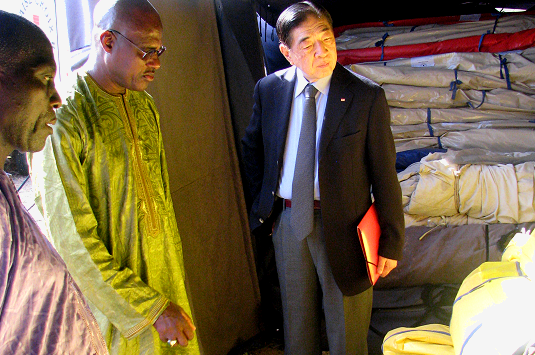 (This article was first published by the Thomson Reuters Foundation)

The latest report from the Intergovernmental Panel on Climate Change (IPCC), published today, is not just another scientific assessment. Its careful wording reflects an increased emphasis on risk: the risks we face today and our choices about the ones we face in the future. From the IPCC’s sober scientific assessment, several stark humanitarian messages emerge.

The first is the strong confirmation that risks have been rising in recent decades. It is a message that has long been clear to millions of Red Cross and Red Crescent volunteers around the world on the front line of the changing climate, assisting the most vulnerable people.

Smallholder farmers in Africa worrying about when to sow their seeds in barren fields. The sick and elderly suffering in deadly heat waves, which have propelled some European countries into the most serious annual disasters worldwide several times over the past decade. Or even more recently the survivors of Typhoon Haiyan in the Philippines, which – like Hurricane Sandy a year earlier – had a much bigger impact due to sea levels that have risen substantially over the past few decades.

Climate change poses formidable challenges to the humanitarian community. It increases disaster risk for millions of the world’s most vulnerable people and compromises people’s ability to sustain their sources of livelihood, especially in poor and under-developed countries. It may also trigger events of unprecedented magnitude that can render current humanitarian response capacity ineffective, with dramatic consequences for those affected.

However the second message emerging from the report is more positive: immense capacities exist to address rising risks – capacities that can be even more effective when applied with greater awareness and investment ahead of potential problems. Again the report is only an echo of what we are already experiencing around the world.

Through our experience working within and alongside communities, we find that the first line of defence for vulnerable communities in many risk-prone countries is preparedness and greater resilience.

There is a greater need now to bridge the gap between climate information providers and users. Scientists and meteorologists need to provide more user-friendly, sector-specific, action-oriented climate and weather information so that vulnerable communities can take timely actions to prepare for climate.

The involvement of local communities is essential in ensuring the effectiveness of climate change adaptation and mitigation. The combined effects of their actions in different areas can make a difference to the way we live and how we relate to the planet that we are all sharing.

Efforts must also focus on strategies for developing effective early warning systems, promoting the wide use of safety nets, women’s empowerment, improved access to markets and management of ecosystems and natural resources.

For example, over many years in Togo, local Red Cross volunteers have been monitoring color-coded poles that warn them of impending floods. That community-based early warning system is now coupled to climate science and linked up across a river basin. Further, some humanitarian support to these communities is now coupled to international forecast-based financing and triggered by scientific warnings of increased risk.

In Guatemala, the Red Cross is working with environmental partners and local government to reforest degraded hillsides. And even during the intense response operations for Typhoon Haiyan, the Philippine Red Cross was making sure changing risks were taken into account in efforts to help communities both recover and reduce the impacts of the inevitable next typhoon.

The third message in the report is about our choices for the future. Past greenhouse gas emissions have already committed us to rising risks for several decades to come. This report shows that we can largely handle those now-inevitable changes. For the second half of the century, however, we face a bigger choice – one that needs to be made now.

If, and only if, we cut greenhouse gas emissions drastically and soon, we will continue to be able to manage the impacts. If, on the other hand, we continue emitting greenhouse gases as we do today, we will be reaching the limits of adaptation in more and more places, and the humanitarian consequences will be dire.

We, all of us – individuals, communities, governments, humanitarian organisations, NGOs, the corporate sector – need to raise our level of ambition and substantially scale up action to mitigate climate change and help people adapt to its consequences.

And these choices bring us to a fourth humanitarian message, one that is much less explicit in the report: now that the IPCC has spoken, many others have to take this information into the world, to a wide range of places, sectors and people.

We must ensure that information on risk finds its way to those who need it most, especially vulnerable groups directly affected, so local knowledge is combined with the best available science. And we must also ensure that an even wider audience is aware of the big choices ahead – about how we address risks that are rising now, and the even bigger risks we can still avoid.

For this reason, we will need to communicate in simpler and clearer terms. Not only to scientists and global policy makers, but in businesses, in schools, in the smallest villages, all over the world; through hard data and facts, but also storytelling, animations and even games.

Everyone should appreciate the risks we are facing and may be leaving behind for our children and grandchildren, and hope that the clarion call will be heard by elected officials making the policy that will determine the humanitarian landscape of the future.