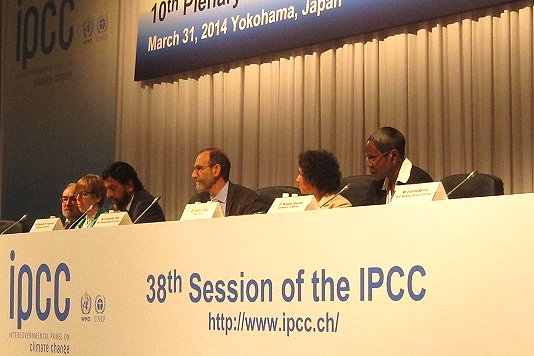 The Secretary General of the International Federation of Red Cross and Red Crescent Societies (IFRC), Bekele Geleta, said today he was deeply concerned about the increasing risks climate change poses to people, reflected in the latest report by scientists on climate impacts.

The new report from Working Group II of the Intergovernmental Panel on Climate Change (IPCC), focusing on impacts, adaptation and vulnerability, was released today in Yokohama, Japan.

The entire second section of the Summary for Policymakers is devoted to future risks and opportunities for adaptation. It says, “Increasing magnitudes of [global] warming increase the likelihood of severe, pervasive and irreversible impacts.”

Speaking in Geneva, Mr Geleta said, “Given the larger evidence base on which the scientists are forming their conclusions and the heightened emphasis on risk to people, we are deeply concerned about this new report, and its implications on our ability to respond to mounting risks today and in the years ahead.”

Significantly, the summary mentions the word “risk” more than 230 times, compared to just over 40 mentions seven years ago in the Fourth Assessment Report.

“This report confirms once more, that we have no choice but to adapt to climate change. said Walter Cotte, IFRC Under Secretary General, Programme Services. “For the IFRC, strengthening resilience and preparedness is the first line of defense for vulnerable communities in many risk-prone countries.

“The report also shows that if we continue to emit greenhouse gases as we are today, we are heading for much more dramatic changes in the climate system which we may not be able to adapt to, posing very serious humanitarian impacts.”

Mr Cotte added: “The Red Cross and Red Crescent is working with communities across the globe to strengthen their ability to address the challenges of climate change, with a particular focus on disaster preparedness, disaster risk reduction, food security and livelihoods.

“Through our extensive network of volunteers, we aim to bridge the last mile gap by working with the most vulnerable communities and strengthening local level preparedness. For example, as part of the Global Framework for Climate Services programme, the IFRC is partnering with the World Meteorological Organization to implement the Climate Services Adaptation Programme in Africa, which aims to build resilience in disaster risk management, food security, nutrition and health.

“More than ever, we need to embark on plausible – and adequately funded – early-warning and resilience-building measures, starting with the poorest and most vulnerable parts of the world.”