Science can save lives. But make research accessible 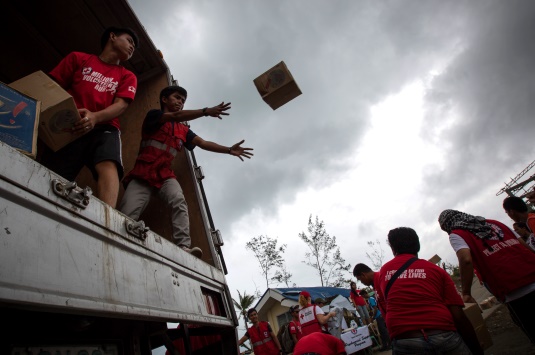 (This is an abridged version of an article in the current issue of Nature Geoscience by Erin Coughlan de Perez, Fleur Monasso, Maarten van Aalst and Pablo Suarez.)

Predictable extreme-weather events result in disasters in many locations. Despite this predictability, those who will be most affected often do not receive warnings when hazardous events are likely to happen.

At least in part, this failure of communication is a result of government agencies and humanitarian organizations being insufficiently connected to climate science.

The Climate Centre aims to bridge this gap by facilitating action based on climate information for both humanitarian work and longer-term development.

We provide support to create early-warning systems that characterize risk across timescales, from hours or weeks to years or even decades ahead of a potential emergency.

These warnings trigger actions to improve preparedness and response: building drainage channels to prevent long-term flooding, for example, or training volunteers who can manage evacuation.

We argue that four features make climate research particularly useful and actionable: a focus on extremes or threshold events; characterization of variability over time; attention to the uncertainties in models; and clear jargon-free findings.

Knowledge about frequencies of future extreme events is in demand – to inform long-term development decisions such as large-scale infrastructure and manage the risk of disasters in the shorter term.

In both cases, critical thresholds of rainfall, temperature or other climate variables are linked to disaster; development and humanitarian decisions are informed by the likelihood of events surpassing these thresholds.

By contrast, much of today’s research represents climate change in terms of annual or seasonal averages of temperature and rainfall, including every figure in the recent Summary for Policy Makers of the IPCC’s Working Group I.

Even seasonal forecasts are presented as changes to the likelihood of total rainfall over a season.

It is often difficult for people to relate these aggregates to critical values that, when reached, can cause losses, such as a rain threshold that will lead to crop failure, or a river-flow threshold that may lead to urban flooding.

As a result, decision-makers simply ignore much of the available climate research. The most useful climate information characterizes parameters that are directly related to vulnerability.

What is needed, secondly, to inform most decisions is an understanding of climate variability projections to 2100.

Although the focus has shifted towards near-term climate change, most of the scientific literature still tends to compare current average climate, such as the period 1980–2000, with projections for the end of the 21st century.

This approach may be helpful to inform decisions on climate change mitigation, but could be very dangerous for adaptation and risk management.

If decisions are being made on end-of-century information, assuming that reality will be a linear progression, the societal consequences can be disastrous.

Taken at face value, this information encourages investment to manage above-normal rainfall. But the region recently suffered from the worst drought-related food shortages in decades.

Our advice for planning in East Africa emphasizes the range of possible outcomes over the entire century and the importance of preparing for this variability.

Uncertainties in projections are at least as important as the projection itself for our work and for decision-makers.

Without estimates of uncertainty, thirdly, graphs or maps of model results are nearly useless: the envelope of possibilities is far more important than the best-guess scenario.

At first glance, there seems to be a wealth of comparisons between models and reality, as well as among models, but an understanding of model bias does not make it clear how to use results.

Presenting confidence intervals around projections can be helpful; going even further, behaviour economics provides many examples of how people make decisions under conditions of uncertainty relying on trial and error, which ultimately leads to poor choices involving forecasts.

Anticipating the risk of those questionable choices can help improve communication and use of climate science.

Even if information relevant to decisions is included, hardly any scientific studies lacking information on uncertainties can be directly translated into action on the ground.

Disaster managers in the Red Cross Red Crescent, for example, cannot be expected to understand and react appropriately to climate information in the scientific literature.

Insurmountable hurdles range from complexity and jargon to low accessibility and inconsistent presentation of data.

Making scientific information usable by non-academic stakeholders should be rewarded – our fourth main point – but currently authors have few incentives to present their knowledge in a way that can inform better decisions.

Making research more accessible would not necessarily take much effort: clear and concise charts with regional information (such as some of the regional summaries in the IPCC’s SREX report), bullet points that summarize main conclusions, and the use of analogies can all go a long way.

If papers could include an outline of implications for decision-making, such as changing return periods of extreme events above critical levels, they would be much more likely to be disseminated within the user community.

In addition, a quick second level of peer review by non-academics might flag research that could be stated more clearly.

To reap the full societal benefit of climate research, more avenues and incentives for an open dialogue between scientists, decision-makers and the public are needed.

It is not enough to invest in research. We must also work towards making climate research more usable, both in the questions being addressed and in how the answers are communicated.

Tacloban in the Philippines, December 2013. A relief distribution by the Philippine Red Cross to families affected by the disaster. The storm surge that accompanied the Typhoon, possibly made worse by rising sea levels, left many of these families’ homes under water. The Climate Centre later saw requests from emergency-shelter planners on return periods of extreme events and the frequency of tropical cyclones in the Philippines. Information to relieve the current dearth on such localized return periods of extreme events would be useful – even with the inevitable margin of uncertainty.
(Photo: Stephen Ryan/Irish Red Cross via IFRC)