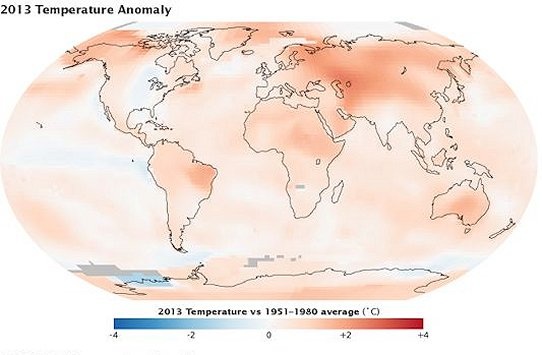 Scientists at the US National Aeronautics and Space Administration (NASA) say last year tied with 2006 and 2009 for the seventh warmest since 1880, “continuing a long-term trend of rising global temperatures”.

NASA’s Goddard Institute for Space Studies (GISS) in New York, which analyzes global surface temperatures, said on Tuesday the Earth “continues to experience temperatures warmer than those measured several decades ago,” according to a report on NASA’s science news website.

“While one year or one season can be affected by random weather events, this analysis shows the necessity for continued, long-term monitoring.”

The average global temperature has risen 0.8C (1.4F) since 1880, according to the new GISS analysis.

Last September, the IPCC’s Working Group I report, on the science behind climate change, reported that it is “extremely likely” that human influence – mainly fossil fuels – has been the dominant cause of the observed increase in global temperature since the mid-20th century.

The NASA scientists emphasize that weather patterns cause fluctuations in average temperatures from year to year, but “continued increases in greenhouse gas levels in Earth’s atmosphere are driving a long-term rise in global temperatures”.

The GISS data is compiled from more than 1,000 meteorological stations around the world, Antarctic research station measurements and satellites, with the period 1951 to 1980 providing a baseline average (see picture).

The scientists say it has been nearly four decades since they recorded a year that was cooler than average.

The global temperature analyses by the US National Oceanic and Atmospheric Administration and the UK Met Office Hadley Centre use slightly different methods but overall show close agreement with GISS.