Climate Centre Review of the Year 2013 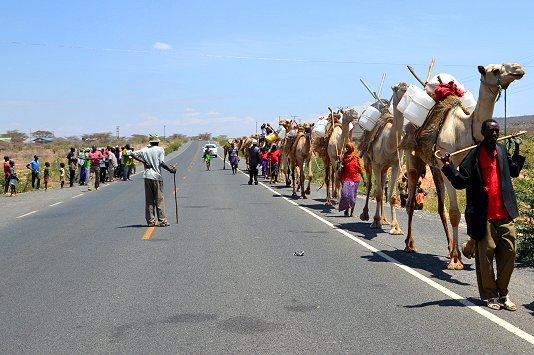 Here are some of the highlights of the Climate Centre year 2013. Please follow links for details.

The International Research Institute for Climate and Society (IRI) launched a new version of the online IFRC map room – a collection of forecast maps, updated daily, that aid humanitarian decision-making around the world.

The president of the Sri Lanka Red Cross Society, Jagath Abeysinghe, presided over a national launch event for a countrywide tree-planting campaign – part of a climate-awareness campaign.

Detailed new IFRC guidance for National Society staff and volunteers stressed the importance of following up humanitarian early-warning of hazards with early action on all timescales.

The Climate Centre and the IFRC’s Fiji-based regional office put together a one-stop-shop poster on early warning, early action experience in the Pacific for National Societies and other humanitarian agencies.

US-based Climate Centre team members addressed the annual meeting of the American Association for the Advancement of Science in Boston, Massachusetts, demonstrating how educational games can help unpack complex ideas.

Rebecca McNaught, Senior Climate Adviser in the Pacific, told Islands Business magazine a recent cyclone in Fiji demonstrated that early warning can and does save lives, especially when coupled with good communications systems, supportive media, and messages that are understood and acted on.

The Climate Centre reported on assessments it helped conduct in operational sites of the urban risk reduction project in Nairobi – implemented by the Kenya Red Cross Society with support from the Danish Red Cross.

The prize for best master’s thesis in humanitarian logistics from the Helsinki-based Humanitarian Logistics and Supply Chain Research Institute went to Rose van Steijn for “Participatory Games as a Possible Road to Safety”; she was advised by the Climate Centre.

Young people in Maputo became planners for a morning, charged with developing their neighbourhoods to increase people’s capacity to deal with unforeseen events, in a “game session for youth” organized by Save the Children and co-designed by the Africa Climate Change Resilience Alliance and the Climate Centre.

We took part in an online debate, hosted by the Thomson Reuters Foundation and the International Institute for Environment and Development, exploring how poor and vulnerable communities worldwide can be helped to adapt to climate change.

Some 300 participants at the 7th International Conference on Community-Based Adaptation in the Bangladesh capital, Dhaka, stood for a minute’s silence for people killed and missing after the collapse of the Rana Plaza building, which housed garment workshops.

Together with the Washington, DC-based International START Secretariat, the Climate Centre organized a workshop on climate-related educational games hosted by the US branch of WWF.

The concentration of carbon dioxide in the atmosphere measured at the Mauna Loa observatory in Hawaii passed the 400 parts per million threshold for the first time since records began in 1958, according to the US National Oceanic and Atmospheric Administration.

The Netherlands Partners for Resilience (PfR) – CARE Nederland, Cordaid, the Netherlands Red Cross, the Climate Centre and Wetlands International – published a summary of two years’ worth of lessons learned from their programmes in nine countries.

The Climate Forum East project for Armenia, Azerbaijan, Belarus, Georgia, Moldova and the Ukraine – co-funded by the European Union, the Austrian government and Red Cross and WWF International – was launched by the National Societies involved.

A report from the World Bank concluded that a warmer world will “keep millions of people trapped in poverty”.

We helped judge the 5th annual youth photo contest organized by the Red Cross Red Crescent Centre for Cooperation in the Mediterranean, which focused on the environment and climate change and was won by Adam Slacanac, a Croatian Red Cross volunteer.

The IFRC and the World Meteorological Organization (WMO) signed a new agreement to work together to reduce climate-related hazards facing vulnerable communities.

An animated film, the first in a series, integrating climate science and disaster preparedness, The Pacific Adventures of the Climate Crab, premiered at the Pacific Meteorological Council in Fiji.

With dangerous heatwave conditions becoming a frequent summer occurrence for the countries of South-East Europe, the Montenegro Red Cross took a lead role in raising public awareness about the risks, working with other national agencies to develop a public-education campaign.

The IFRC posted a special multimedia website, Behind the Postcard, on the effects of climate change in the Pacific and what the region’s National Societies are doing to help people address it.

The official summary of the new report from Working Group I of the Intergovernmental Panel on Climate Change, on the science behind climate change, was released to the world in Stockholm.

The second of two animations integrating climate and disaster preparedness in the Pacific, Cloud Nasara, was released for download, along with educational materials in Bislama, one of the languages of Vanuatu, English and French.

The IFRC reported that timely action taken by the Belarus Red Cross to prepare for spring floods made a significant difference to the humanitarian response.

A four-day PfR global work conference in The Hague brought together nearly 60 risk-reduction practitioners from Africa, Asia and Latin America.

Good disaster preparedness was said to have saved thousands of lives during Cyclone Phailin, in India’s Odisha state.

A UK think-tank report said extreme weather linked to climate change is increasing and without concerted international action may cause disasters that nullify progress on poverty reduction.

Over 300 scientists and practitioners gathered for the Africa Climate Conference 2013 in Arusha, Tanzania, to discuss how Africa can respond to climate variability and change.

The WMO said in its provisional 2013 Status of the Global Climate brief that global sea levels had reached a record high, making coastal communities more vulnerable to storm surges like the one that struck the central Philippines during Taiphoon Haiyan.

The IFRC co-hosted two successful side-events at the COP 19 UN climate talks in Warsaw, where the Climate Centre rolled out a new edition of the inter-agency Minimum Standards for bridging national climate policy and local risk-reduction at the 11th Development and Climate Days weekend.

UN Secretary-General Ban Ki-moon called for “bold announcements and actions” to reduce greenhouse gas emissions and strengthen adaptation and resilience, according to a UN statement at the end of COP 19.

The Climate Centre joined leading scientists in Brussels to help set the agenda for research into regional climate change being conducted through the Coordinated Regional Climate Downscaling Experiment, known as CORDEX.

The European Development Days conference in Brussels featured a prominent IFRC presence, including Secretary General Bekele Geleta (who took part in a high-level panel in his capacity as a member of the UNAIDS and Lancet Commission: Defeating AIDS – Advancing Global Health), the Climate Centre and the Brussels-based Red Cross EU Office.

IRI and the US Agency for International Development launched a comprehensive set of training webcasts geared for development professionals who want to be more fluent in the science that underpins climate adaptation.

The Third International Conference on Climate Services, hosted by the Meteorological Service of Jamaica and its Ministry of Water, Land, Environment and Climate Change, was held at the Montego Bay Convention Centre.

In August the Netherlands and Kenya Red Cross, together with PfR agencies and the IFRC, organized a week-long fund-raising camel caravan for the protection and enhancement of the Ewaso Nyiro river. It promoted better management and use of the river through ecosystem management and restoration. About 2.5 million people along its course are increasingly exposed to droughts, floods and resource-based conflict. (Photo: Charlotte Floors/NLRC)