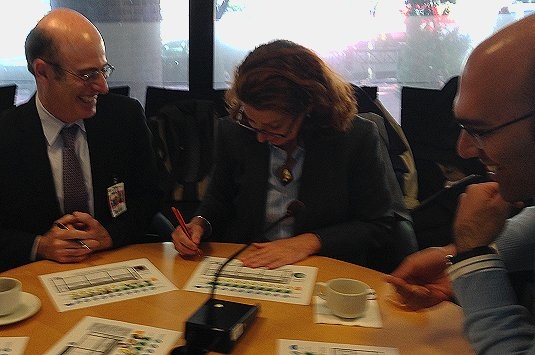 The fast-paced prototype game requires players to manage flood and drought risk by “investing” beans in a combination of production and preventive measures.

The historical probability of rainfall is initially represented by dice; then as climate conditions become increasingly uncertain, players have to deal with rising confusion and frustration.

But the game helps them decide how decisions can be made more robust against the backdrop of a changing climate and its impacts.

The World Bank is currently exploring “robust decision-making under uncertainty” with a team from the RAND Corporation led by Robert Lempert, Director of the RAND Frederick S. Pardee Center for Longer Range Global Policy and the Future Human Condition.

The center aims to enhance human life by disseminating new methods for long-term policy analysis in areas where they are needed most, according to its website.

The World Bank was later using Unpacking uncertainty in a workshop in Peru on “water resources and development planning for Latin America”.

Experts from the Climate Centre have been working with the World Bank’s Office of the Chief Economist for Sustainable Development to develop games to help planners making development investments get to grips with deep uncertainty of the kind generated by climate change worldwide.

The Climate Centre led one-day a games workshop for Indonesian participants at the South-East Asia launch earlier this year of the Green Growth Knowledge Platform – a development partnership of the Global Green Growth Institute, the OECD, UNEP and the World Bank.