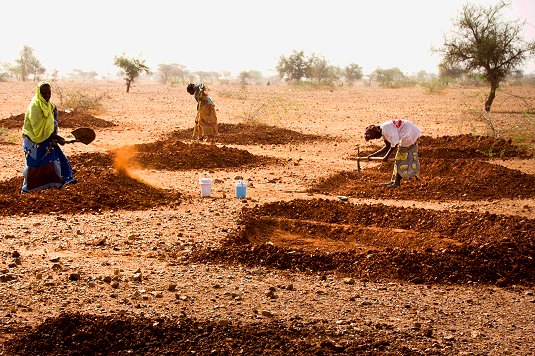 An old saying goes “imitation is the highest form of flattery”. That’s certainly the view from Niger, where Safi Solange Bako is running a programme to promote climate-friendly agriculture, writes CDKN’s Mairi Dupar in the second of her blogs from D&C Days in Warsaw.
The programme is yielding so many pay-offs for participants, that the new farming practices involved are spreading spontaneously beyond project boundaries and into other parts of the country.
As Niger is exposed to longer dry periods and more erratic rainfall, Ms Bako’s team is training farmers to grow more drought-resistant varieties of millet, sorghum, and cowpeas – the staple crops.
Where once depleted forests were the sign of an exhausted environment, now extension workers and communities have planted out tree saplings and re-injected life.

Tinderbox conditions can increase the risk of forest fires, so teams have opened more than 1000 firebreaks across agriculture and forest land, and trained 250 community firefighters.

Community radio stations broadcast information about climate impacts and solutions.
Low-cost methods
Ms Bako’s programme aims to increase the climate resilience of agricultural systems in Niger, and in so doing strengthen rural people’s food security.
It is set to benefit up to a quarter of a million people in this country of 15 million, the vast majority of whom are farmers. The ambitious effort has been funded by the Global Environment Facility.
The programme is not without its challenges, but programme leaders knew they must be doing something right, said Ms Bako, when they saw farmers outside the project area adopting some of their new, low-cost methods. She shared her experiences at the Development & Climate Days 2013 in Warsaw.
D&C Days participants returned time and again to that climate finance puzzle (akin to “which came first, the chicken or the egg?”). They asked: which comes first, the climate action or the finance?
Ms Bako’s case study inspired a new way of looking at this conundrum. If you can demonstrate that a climate adaptation approach really works, then the approach – or elements of it – might spread without further external investment.
Communications
Ms Bako concluded that the programme’s learning-by-doing approach, dialogue among communities and local government, and use of cereal and animal feed banks have built capacity and even helped to stem the exodus of people from rural to urban areas.

The use of community radio stations to spread the word was a particularly successful measure, and one that is already adopted by other districts of Niger because of its low cost.

Communications took centre stage as participants debated the opportunities and challenges of climate adaptation.
From Afghanistan, where a recent scarcity of rain and snowfall has starved agriculture of its water resources, to Uruguay, where erosion and saline intrusion is affecting coastal resources, adaptation managers are keen to broader participation in their initiatives through effective communications.
For Ms Bako, community radio was transformational in mobilising communities in rural Niger. But elsewhere, other forms of knowledge management and communications are proving to be more effective.
Gebru Jember Endalew has been involved in a GEF-supported programme called Coping with Drought and Climate Change, across Ethiopia, Kenya, Zimbabwe and Mozambique.
‘Lots of ceremonies’
In Ethiopia’s South Wollo zone, Mr Endalew and his team have fostered strong ownership among communities for climate-smart water management by holding massive public gatherings.
“We organise a climate hearing with the permission of local government – 1000 people on a field, with lots of ceremonies,” he said, explaining that a mass ceremonial approach increases credibility, but also gives residents the chance to have their say in front of decision-makers.
People are invited to come forward and give testimonies on how their area has changed over the years: “That is important in terms of getting people’s perception of climate change,” he said.
The stories from rural Niger and Ethiopia highlight four elements that drive success and scaling-up:
• Proposed adaptation measures were demonstrated to be effective in reducing climate change impacts;
• Measures were proven to be directly beneficial to farmers’ or land managers’ livelihoods;
• Local people had a chance to make their voices heard in articulating the problem and designing the solution;
• Lessons learned from pilot activities were communicated in culturally appropriate ways.
In Sansané Haoussa village in Niger, between the Niger River and the road from the capital Niamey to Tillabéry, the IFRC is supporting a cash-for-work land-reclamation project implemented by Niger Red Cross that is helping to roll back drought impacts. Using only shovels and picks, villagers construct elevated dirt embankments that catch the rain, enabling the grass they sow to turn the once-arid land into pasture.
(Photo: Mari Aftret Mørtvedt/Norwegian Red Cross)
We use cookies on our website to give you the most relevant experience by remembering your preferences and repeat visits. By clicking “Accept All”, you consent to the use of ALL the cookies. However, you may visit "Cookie Settings" to provide a controlled consent.
Cookie SettingsAccept All
Manage consent