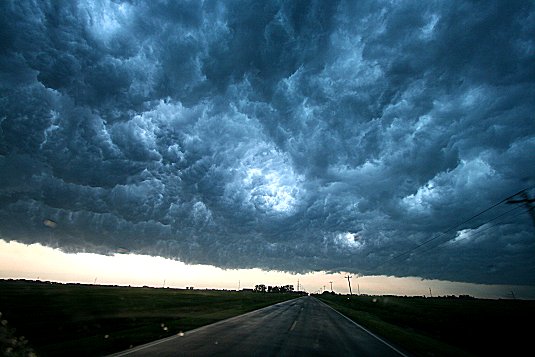 This continues an “upward and accelerating trend which is driving climate change and will shape the future of our planet for hundreds and thousands of years,” said the Geneva-based WMO in the 2013 edition of its annual Greenhouse Gas Bulletin.

The bulletin reports that between 1990 and 2012 there was a 32 per cent increase in “radiative forcing” – warming effect – because of carbon dioxide (CO2) and other greenhouse gases (GHG) like methane and nitrous oxide; CO2, mainly from fossil fuel emissions, accounted for 80 per cent of this increase.

“The atmospheric increase of CO2 from 2011 to 2012 was higher than its average growth rate over the past ten years,” according to the WMO.

Since the start of the industrial era in the middle of the 18th century, the concentration of CO2 in the atmosphere has increased by 41 per cent, methane by 160 per cent and nitrous oxide by 20 per cent, said a press release announcing the latest findings on GHG.

“The observations from WMO's extensive Global Atmosphere Watch network highlight yet again how heat-trapping gases from human activities have upset the natural balance of our atmosphere and are a major contribution to climate change,” said WMO Secretary General Michel Jarraud.

“As a result of this, our climate is changing, our weather is more extreme, ice sheets and glaciers are melting and sea levels are rising,” he added.

Mr Jarraud cited the recent report from the Intergovernmental Panel on Climate Change (IPCC) which said that in a business-as-usual scenario, “global average temperatures may be 4.6 degrees higher by the end of the century than pre-industrial levels…This would have devastating consequences.

“We need to act now, otherwise we will jeopardize the future of our children, grandchildren and many future generations. Time is not on our side.”

About half of the CO2 emitted by human activities remains in the atmosphere, with the rest absorbed in the biosphere and oceans.

Climate Centre Director, Dr Maarten van Aalst, said in response to today's new data: “It's important to note how much GHG have already risen. This means we're locked in to climate change for several decades, regardless of what we do on reducing GHG.

“Not only are we now getting hard numbers on the atmosphere, we're also seeing climate experts warning us about the consequences.

“As Mr Jarraud points out, we have to act fast if we want to avoid climate change getting out of hand in the second half of the century.”

The WMO and the IFRC earlier this year signed an agreement to work together to reduce climate-related hazards facing vulnerable communities around the world.

Spectacular thunderstorm and super-cell clouds in Oklahoma during VORTEX II research into severe storms in May 2009. The climate is changing and the weather becoming more extreme as a result of record concentrations of greenhouse gases in the atmosphere, says the World Meteorological Organization.
(Photo: Sean Waugh/NOAA-NSSL-VORTEX II)