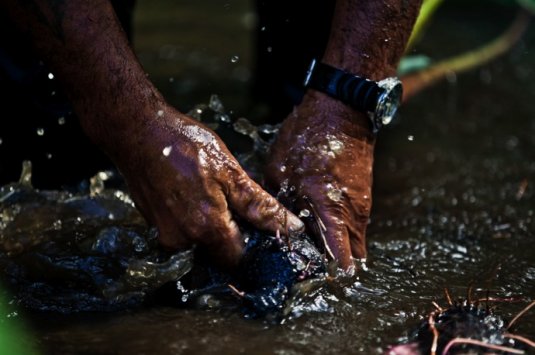 (IFRC photographer Benoit Matsha-Carpentier and writer Patrick Fuller went on mission in the Pacific to capture the effects of climate change on some of the most vulnerable places on earth, and to see what National Red Cross and Red Crescent Societies are doing to assist people. Local voices, stories and pictures are all presented on Behind the Postcard, a special multimedia IFRC website.)

Every year, thousands of tourists flock to the Cook Islands, a tropical paradise of pristine white sandy beaches and turquoise waters.

Despite the abundant natural beauty, most would be totally unaware of the creeping threat that climate change is posing to the fragile ecosystems of the islands.
Comprised of a group of 15 islands located in the South Pacific Ocean, the Cook Islands have a land mass of just 237 square kilometres, although the territorial waters surrounding the islands stretch for nearly 2 million kilometres.
The islands are divided into two distinct geographic groups. The southern group tend to be high volcanic islands, whereas the northern group of islands are coral atolls mainly made up of circular sand cays around a lagoon. The northern islands are increasingly vulnerable to rising sea-levels.
In 1997 almost half the population of the island of Manihiki was relocated to Raratonga and then to New Zealand. Standing barely four metres above sea-level, the island has become increasingly vulnerable to storm surges and coastal flooding.
The story in the most southern of the Cook Islands, Mangaia, is very different. A coral island forced up by seismic activity centuries ago, the centre of Mangaia rises up into densely forested hills.
Tidal patterns
Every day, retired schoolteacher Tearapiri Teaurima can be found tending his taro plantation in the fields adjacent to his home. At 72, he is finding the task increasingly arduous.
“When I was a boy this whole valley was cultivated,” he says. “All you could see here were taro swamps; we would swim around as we helped our parents.
“Now there is no water flowing down the valleys, the streams have dried up, the swamps are gone and many of the fields have been left to run wild because so many young people have migrated.”
As a farmer Tearapiri is acutely aware of the changing weather patterns on the island.
“Now the winters are milder and they last longer. Traditionally it rained three days before a new moon which was when we would plant our seeds, but now the rains are unpredictable so we are having to change our methods of planting, using less water.”
Local fishermen such as Ngametua Tangatakino are also feeling the effects of climate change: “I’ve really noticed the changes in the ocean currents around the island. The current patterns are unusual, they switch direction abruptly and sometimes go in circles, it's hard to know where to put my line down.”
Ngamentua works as a marine officer with the government. In 2010 he spent six months recording tidal patterns around Mangaia and found that the average low tide mark had become significantly higher.
Now it’s rare that the reef surrounding the island is exposed at low tide, denying local woman the opportunity to forage for crabs and snails – a traditional mainstay of the local diet.
Local fisherman on Mangaia all agree that things are changing. Fish are not coming in season, tides are changing and ocean fauna is disappearing.
“We used to know which season a fish will be abundant which gave us time to prepare our equipment,” explains one fisherman. “Now we just don’t know and some fish don’t come anymore.
“The whales that migrate past here every year should be next to the reef now, but they come two months later and leave later.”
Higher-category cyclones
Some think that the absence of certain fish species is due to the increasing acidification in the Cook Islands’ waters which has led to the disappearance of seaweed in the lagoon which disrupting the food chain.
A scientific survey conducted in 2010 revealed that seaweed stocks had almost disappeared from the deep ocean surrounding Mangaia.
“There used to be so many varieties of seaweed but now we are left with only a few. They are saying that 20 years from now it will all be gone and there won’t be any fish,” says Ngamentua.

In recent years there has also been an emerging pattern of more intense storms and higher-category cyclones.

Early in 2005 the Cooks experienced five cyclones in one week, and in 2010 the island of Aitutaki experienced one of the worst cyclones in memory when 80 per cent of the houses on the island lost their roofs.
Rebs Samuel heads the Cook Islands disaster risk reduction programme. He works closely with the local community in Mangaia and helped to start a ‘Tie-down’ project across the island.
“The basic idea is to tie down your roof so that your home can withstand strong winds,” he says.
“This concept is already familiar to Cook Islanders. But we find from our surveys that most people can’t afford to purchase the concrete anchor and the rope so we provide the materials and train people from the community who then help others.”

According to Paul Davenport, IFRC resilience coordinator for the Pacific, climate change is just one of a combination of factors driving vulnerability in the Cooks.

Depopulation is a major issue, particularly in the outer islands where people from the age of 18–40 often migrate to Raratonga or New Zealand.

In recent years Mangaia’s population has dwindled from over 1000 residents to just over 400.
“When you combine depopulation with the affects of climate change, such as a reduction in rainfall, changing fishing seasons and reduced fish stocks, you end up with an environment where life is more of a struggle for the mainly elderly population that remain,” Davenport says.
“They are far more vulnerable as they don’t have the family network to support them.”
The Red Cross is part of the government’s national sustainable development plan. For Frances Topa Fariu, secretary general of the Cook Islands Red Cross, climate change has become an issue that cuts across all of the organization’s programmes.
“We see the Red Cross as playing a vital role in tackling the issue at the grassroots level,” she says.
“The challenge is to build the capacity of our Red Cross branches in the outer islands so that we can fully understand the needs of isolated communities and help them adapt to climate change.”
Farmers are growing wet taro in the swamp on Mangaia, the most southerly of the Cook Islands in the Pacific. But because the water is getting scarce they must adapt by planting new type of crops. (Photo: Benoit Matsha-Carpentier/IFRC)
We use cookies on our website to give you the most relevant experience by remembering your preferences and repeat visits. By clicking “Accept All”, you consent to the use of ALL the cookies. However, you may visit "Cookie Settings" to provide a controlled consent.
Cookie SettingsAccept All
Manage consent