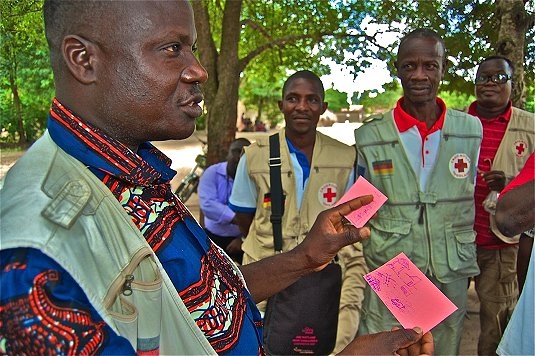 The Togolese Red Cross (TRC) is now ready to take full advantage of a groundbreaking effort linking early warning to early financing, often a bottleneck in enabling humanitarian action ahead of disasters.

The initiative would be part of a project designed in 2012 for the Togo and Uganda Red Cross.

It ís funded by the German Federal Ministry for Economic Cooperation and Development (BMZ) through the German Red Cross (GRC), with technical assistance from the Climate Centre.

It contains an innovative component that identifies forecast-based thresholds, on various timescales, that trigger financing and action before disaster.

Says Climate Centre Director Maarten van Aalst: “Programmes like this set a precedent for forecast-based financing as a key to international aspirations to strengthen resilience along the continuum between humanitarian assistance and long-term development.”

The TRC has 35,000 active volunteers (about 1 in 200 of the population are members), and the National Society is widely respected for its reach and achievements.

A nationwide system of early-warning river-depth poles already established by the TRC will become a cornerstone of the new project in Togo.

“The poles have been saving lives life since 2009,” says Dak Martin Doleagbenou, National Coordinator of the TRC’s programme for disaster risk reduction (DRR) and climate change adaptation, “especially in September 2010, when 3120 people were evacuated 20 hours before ahead of floods in Mono river basin.

“Those floods were particulary serious in Yoto prefecture from where 2018 people were evacuated with the help of civil protection services and the national platform for disaster risk reduction.”

This early-warning network will now be expanded through the installation by the TRC of rain gauges in all Togo's river basins, from which volunteers will send data back to the national hydrological service, also project partners.

“The Togo Red Cross has good pre-existing connections to the national platform for disaster risk reduction and the environment ministry,” says Thorsten Klose, Senior Adviser for Disaster Risk Reduction and Climate Change Adaptation at the GRC in Berlin.

The University of Lomé, meanwhile, is assigning a group of hydrology students to explore mapping geographical elevations relevant to the flood danger.

At the community level, the TRC plans to use Climate Centre educational games like Memory Strings, Ready! (pictured), and Paying for Predictions to explain the project and gather information about past disasters.

Among problems yet to be overcome with the project in Togo is a shortage of hydrometeorological data, and improving data-based connections between seasonal forecasts and disaster risk.

However, as part of its technical input – which includes the recruitment as research assistants of local graduate students majoring in relevant subjects – the Climate Centre is working with the TRC on a vulnerability and capacity assessment that takes climate risk into account.

Besides periodic devastating floods, Togo also suffers a number of other climate impacts.

On this latest mission to the country, we saw evidence of rapid coastal erosion which has forced the reconstruction further inland of two highways; saline intrusion is also compounded by reduced flows in the Mono river system.