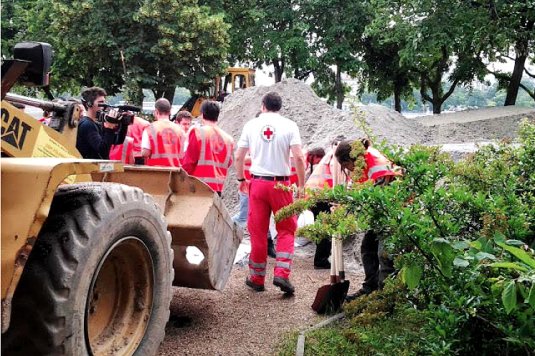 At least 15 people have died and several others are missing, according to a European Commission update, as a period of intense rainfall caused disastrous flooding in Austria, the Czech Republic, Germany and Slovakia.

Various rivers are affected including the Danube, Elbe, Mulde, Saale, and the Vltava, which flows through the Czech capital, Prague.
Calling the flood on the River Saale “a tidal wave”, the German news magazine Der Spiegel said the waters had reached “the highest level for 400 years”.

Floodwater on the Danube was expected to reach the Hungarian capital, Budapest, later this week.

The IFRC released a grant of just over 42,000 euros from its Disaster Relief Emergency Fund to assist the Hungarian Red Cross, which was working with the National Directorate General for Disaster Management to prepare and assisting some 1,500 families at greatest risk.
‘Tidal wave’
Among other highlights of the local Red Cross response so far:
*The Austrian Red Cross said thousands of volunteers were assigned two main tasks: a rescue service and support for the protective evacuation and care of people affected.
In western parts of the country, they were also helping with the clean-up, now that the floodwaters were moving east; 50 Red Cross psychosocial experts were working in the flood areas.
*In the Czech Republic, the Red Cross by mid-week had set up five evacuation centres in Prague, where there had been fears of a repeat of the 2002 disaster, and assisted with building flood barriers.
The National Society’s central crisis team was activated last weekend as the waters first rose. The Czech government said 7,000 people had been evacuated as of 4 June.
*The German Red Cross said its personnel had been working flat out since the weekend, including some 1,500 volunteer specialists from water and mountain rescue units.
The Red Cross has distributed 2,000 cots with blankets and pillows in flooded areas; hundreds of portable dryers were also being provided to people flooded out of their homes, as well as short-term water-purification plants in the worst-affected cities.

*The Slovak Red Cross reported that it had a special humanitarian volunteer unit and a Zodiac Pro 500 boat on four-hour standby, as well as other equipment like a tent, sleeping bags, pumps and driers.

Extreme weather
“This disaster fits a general pattern of rising risks,” said Dr Maarten van Aalst, Director of the Climate Centre.
“The heavy rainfall dumped on the region, coming on top of a wet spring that left the ground saturated, was clearly very unusual.
“The odds may also be changing long-term: a warmer climate is expected to bring more heavy rainfall to this region.
“But in addition, changes in land use have certainly contributed to the floods, and it’s clear more must be done to manage these rising risks, in Europe and elsewhere.”
The Climate Forum East project – launched last month for Armenia, Azerbaijan, Belarus, Georgia, Moldova and the Ukraine, and co-funded by the European Union, the Austrian government and Red Cross, and WWF International – is an example of how some National Societies are starting to do that.
The National Societies involved held inaugural meetings, and civil society actors will now be meeting government officials and academics to identify the sectors that are most vulnerable to climate change and extreme weather, and plan solutions.
It follows on from the South-East European Forum on Climate Change Adaptation, established by local Red Cross societies in 2009.
Hungarian Red Cross workers preparing defences as Danube floodwater bore down on the capital, Budapest. (Photo: Hungarian Red Cross)
We use cookies on our website to give you the most relevant experience by remembering your preferences and repeat visits. By clicking “Accept All”, you consent to the use of ALL the cookies. However, you may visit "Cookie Settings" to provide a controlled consent.
Cookie SettingsAccept All
Manage consent