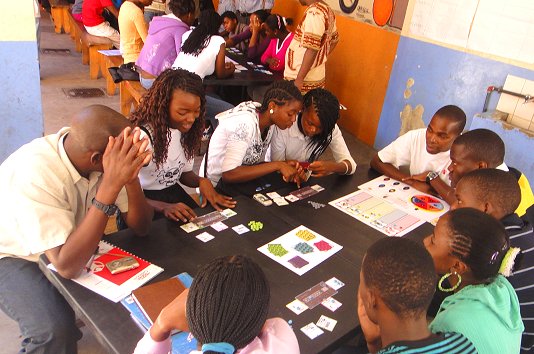 Last Saturday, a group of 25 young people in Maputo became planners for a morning – charged with developing their local districts so as to increase people’s capacity to deal with unforeseen events, while safeguarding the long-term well-being of communities.

A “game session for youth” was organized in the Mozambique capital by Save the Children, a member of the Africa Climate Change Resilience Alliance (ACCRA).
ACCRA, founded in 2009, is a consortium of agencies including Oxfam GB, Care International, World Vision International and the UK Overseas Development Institute (ODI).
It aims to understand what processes are needed in district-level planning to promote “flexible and forward-looking decision-making” (FFDM) – detailed in a recent report published by the ODI and co-authored by the Climate Centre.
Quick and creative
With support from the Climate and Development Knowledge Network, ACCRA joined forces with the Climate Centre last year to design an educational game as a practical tool to convey FFDM to stakeholders at the district level in Ethiopia, Mozambique and Uganda.
The ACCRA game-session with Mozambican youth was groundbreaking for two reasons. Firstly, the ACCRA game had to date only been played by district-level decision-makers in Uganda and Ethiopia, to communicate both FFDM principles and the need for real policy change.
In Maputo, the young people were quick and creative – telling stories about why they were choosing to invest in specific development projects for their imaginary districts.
At the end of the Saturday session, participants agreed the game was an innovative, inspiring and fun way to learn.
Investments
The session was also memorable for being entirely run by newly trained local facilitators, offering a unique opportunity for them to test recently acquired game-skills with curious, enthusiastic and motivated youngsters, aged 14 to 19.
One player observed: “In the beginning, I was investing mostly to get immediate benefits. But the game taught me that we have to plan for the future and protect our investments against unexpected events”.
The Mozambican facilitators went on to run the game at a two-day workshop with local planners in Guijá district, in the country's Gaza province.
Mozambican teenagers game out “flexible and forward-looking decision-making” at a Maputo workshop. “The game taught me that we have to plan for the future,” said one. (Photo: Frederick Womakuyu)
We use cookies on our website to give you the most relevant experience by remembering your preferences and repeat visits. By clicking “Accept All”, you consent to the use of ALL the cookies. However, you may visit "Cookie Settings" to provide a controlled consent.
Cookie SettingsAccept All
Manage consent