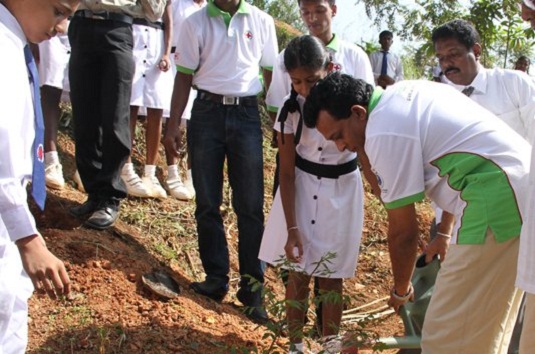 The president of the Sri Lanka Red Cross Society (SLRCS), Jagath Abeysinghe, has presided over the “national event”, at Kaikawala Central College in Matale, in its new countrywide tree-planting campaign.

The programme is part of a climate-awareness campaign launched by the SLRCS earlier this month.

The SLRCS donated 100 saplings to Kaikawala for children to plant and take care of.

The National Society – supported by the IFRC and the German Red Cross – last week launched a major programme to “educate, inform and raise awareness of climate change and its impact on Sri Lanka”.

A press conference in Colombo on 15 January announced the campaign to the world: it will eventually encompass 5,000 children and 50,000 trees, as a highlighted in a special video – Adopt and adapt: plant a tree to save the planet.

The campaign is aimed at sixth-grade children who will monitor and record the growth of the plants, helping them understand the role of trees in mitigating the effects of climate change.

“If we want to make a change, we need to educate our children,” said Jagath Abeysinghe, speaking at the press conference.

“This is exactly why we chose to plant these trees within school communities. We get to teach the children the importance of safeguarding our environment.”

“They will face more natural disasters as well as reduced access to water, malnutrition and changing disease patterns.

“In order to have a sustainable world for our children, we need to be aware that our actions of today will have a critical bearing on the world that our children will inherit.”