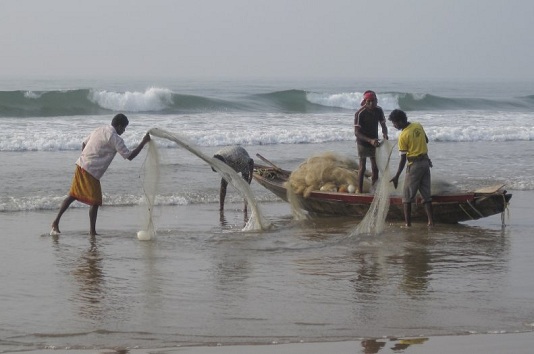 Carbon dioxide doesn’t just stay in the atmosphere and warm the planet: about one third of the CO2 produced through human activities since the Industrial Revolution has been absorbed by the world’s oceans. And it’s changing the chemistry of the sea.

Over the past 200 years, the acidity of the oceans has increased by almost 30 per cent and is likely to have increased 100–120 per cent by the end of the century, threatening marine ecosystems.

Now a review by the Climate Centre explores how this degradation of marine ecosystems is affecting people, threatening food security and increasing disaster risk; billions rely on the oceans and the plants and animals they sustain.

Roughly half the world’s population lives within 100 kilometres of a coast; and coastal settlements are growing faster on average than those inland.

Of these billions of people, it is poor and vulnerable coastal populations directly dependent on marine-based goods and services who will be most affected by ocean acidification and other climate-change impacts.

Acidity reduces carbonate ions in the ocean – a vital building-block used by marine species such as the coral reefs that help protect coastal communities from wave damage.

The ocean and its coastlines together provide habitat, energy and fisheries; the oceans regulate the carbon cycle, aid the cycling of nutrients, and provide recreational, educational, aesthetic and spiritual benefits to humans.

The only one way to decelerate ocean acidification, according to the Climate Centre study, is to “drastically reduce the amount of carbon dioxide and other greenhouse gases that are produced globally.”

Local control of sources of stress other than acidification like over-fishing, pollution and the destruction of habitats can also alleviate some effects of acidification, enabling coral reefs to regenerate and communities to better adapt better to climate change.