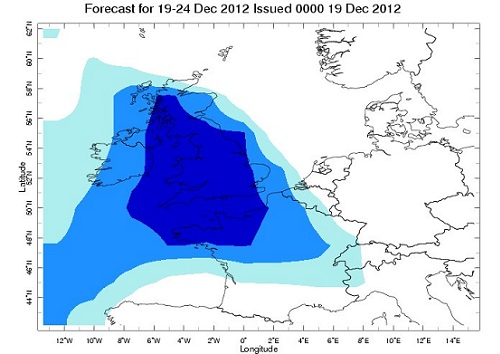 The International Research Institute for Climate and Society (IRI) has launched a new version of the online IFRC map room – a collection of forecast maps, updated daily, that aid humanitarian decision-making around the world.

IRI is part of the Earth Institute at New York’s Columbia University; the map room was first developed as part of its “partnership to save lives” with the IFRC that was facilitated by the Climate Centre and began in 2007

Now it has been extensively updated to incorporate five years’ worth of feedback from users and make the climate information the maps display both more accessible and compatible with mobile phones.

A set of new maps has been added with information about long-term climate change and the El Niño phenomenon.

The new map room also provides information on the types of early action that forecasts might trigger, such as the advance preparedness for floods in West Africa that was highly effective in 2008.

The IFRC map room home page shows the rainfall forecast worldwide for the next six days – the most immediately relevant for disaster planning on short timescales.

A row of easily accessible tabs take users to maps covering a full range of timescales and showing:

If exceptionally heavy rain is expected, humanitarian first-responders are advised to contact their local meterological service, monitor forecasts for at least six days, consider who may be most affected by heavy rainfall, and review contingency plans.

Red Cross Red Crescent disaster managers can left-click, drag, and hit Enter to zoom in on an area of interest.

Users are again invited to write in to ifrc@iri.columbia.edu with feedback and questions.

A detailed instructional video on how to use the map room is expected to be released early in the new year.

‘British weather’: part of the IRI global six-day forecast for heavy rainfall, issued on 19 December 2012. Darker blue indicates heavier rain. A week later, floods had brought parts of the UK to a standstill, at the end of a record-breaking wet year in the country. (Picture source: IRI)