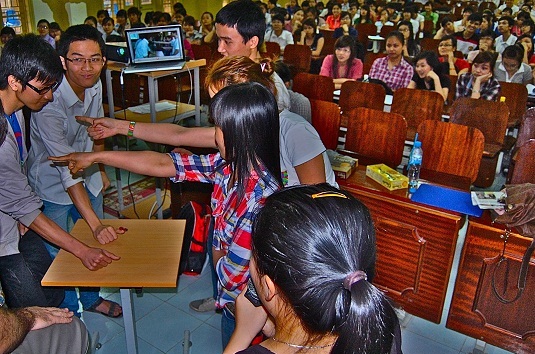 Two-thousand-and-twelve was not just a great Olympic year! It was also the year in which the Climate Centre took its programme of reality-based games, intended to help Red Cross Red Crescent disaster-managers and others make better decisions, into the educational mainstream.

Thanks to support from the American Red Cross and the UK’s Climate and Development Knowledge Network (CDKN), the Climate Centre was able to significantly scale-up its games programme in 2012.

More than 120 game events in at least 30 countries reached some 3,000 stakeholders this year – ranging from subsistence farmers developing contingency plans for flooding to finance-ministry staff involved in an Africa-wide disaster insurance project.

Climate Centre games were also played at the White House, on the fringes of the UNFCCC’s COP18 meeting in Qatar, and at the consultative group of the World Bank Global Facility for Disaster Risk Reduction.

Games such as Upstream/Downstream, Climate and Gender, Paying for Predictions, and Humans versus Mosquitoes, engaged players in simulated reality and helped them toward “constructive dialogue and learning on practice and policy for the better management of climate risk,” according to Carina Bachofen, a senior games specialist with the Climate Centre.

“Our games created an atmosphere of collaboration and mutual understanding in the most diverse contexts,” she adds.

The Climate Centre also expanded its efforts to engage practitioners and policy-makers in the design of new games, to promote important lessons that emerge from their work and would be valuable for others.

It collaborated with the Pardee Center at Boston University to publish Games for a New Climate: Experiencing the Complexity of Future Risks.

Media and online coverage of Climate Centre experience with games has been extensive: from a multitude of tweets and blogs targeting the climate-science, development and humanitarian communities to coverage by leading outlets like Reuters, US National Public Radio, and newspapers worldwide.

A plan for the training of facilitators of games is also expected to be rolled out next year.