COP18 blog: climate negotiations and a counsel of despair 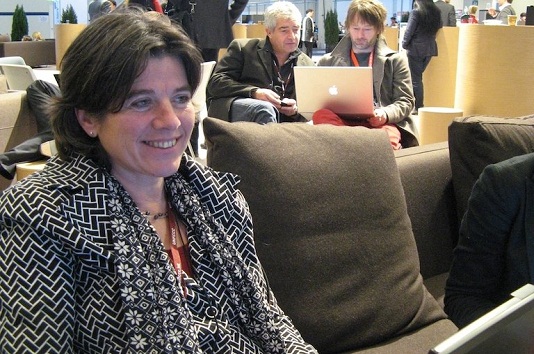 “I ask all of us here, if not us, then who? If not now, then when? If not here, then where?” These were the emotional concluding words of Naderev Saño, leader of the Philippine delegation at the end of the UN climate talks in Qatar, writes Madeleen Helmer, Climate Centre Director of Policy and Communication, in her blog from the capital, Doha.

As Saño spoke, hundreds of thousands of his compatriots were struggling with the impacts of Super-Typhoon Bhopa.

Despair is seeping into the COP process. Since the failure of COP15 in Copenhagen in 2009 to agree collective steps to prevent climate change becoming very dangerous, the negotiation process is on life-support.

Negotiations cannot move forward if big countries do not come up with drastic proposals to curb emissions of greenhouse gases and provide financial support to developing countries already hit by the impacts.

The negotiations now live only for that moment.

It would have been naive to come to Doha with high expectations. A year ago at COP17 in Durban, countries just agreed, at the eleventh hour, to continue talking and work towards a new agreement in 2015. Buying time was the only outcome.

Doha was to have been a “transitional” COP session towards this successful agreement in 2015. But little of the time bought was invested efficiently.

The Kyoto protocol, the only legally binding mechanism to curb global emissions, will continue, but with even fewer countries committed to it.

EU states, mainly, pledged additional funding for mitigation and adaptation in developing countries, but with no vision on how to move from the few billion dollars pledged now to the Copenhagen commitment of 100 billion annually by 2020.

And there was not even a ray of light on Copenhagen’s most important commitment: to keep global warming below the dangerous 2-degree level.

Another year has passed; there are more signs that the world is moving to a devastating 3–4 degrees of global warming.

As a consequence, the negotiations moved to topics that were unthinkable ten years ago, when all efforts went toward avoiding dangerous climate change from happening at all – curbing greenhouse gas emissions or “mitigation”.

But for the past five years, it’s been accepted that climate change can no longer be avoided, and in particular the least developed countries and island states need substantial support to adapt.

In Doha, the next phase was discussed: “What if adaptation does not work or is insufficient and extreme events cause ‘loss and damage’?”

This is a subject many emitting countries fear; they do not want to be held liable for the impacts in a more specific way than a commitment to finance adaptation.

For developing countries, after years of disappointment that greenhouse gas emissions are not being reduced fast enough and adaptation funding is less than needed, the acknowledgement that a mechanism for loss and damage should be a subject for negotiations was the key to success or failure in Doha.

In the end, all countries agreed to continue talking about “institutional arrangements” such as an international mechanism for this loss and damage – surely a counsel of despair.