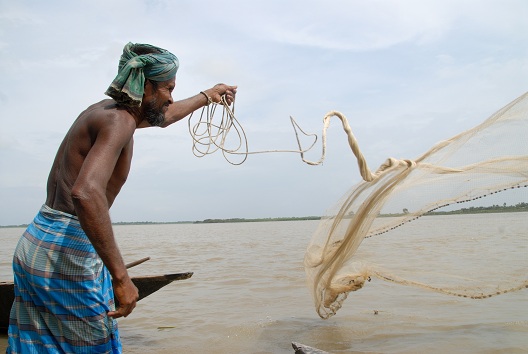 A new report for the UK government aimed at helping policy-makers reduce the risks of disasters has drawn on Red Cross Red Crescent experience and Climate Centre expertise in framing its conclusion that science can blunt the impact of future hazards.

“There are more people at risk than ever from natural hazards, particularly in developing countries, and this number will continue to rise over the next 30 years,” Professor Sir John Beddington, who heads the Government Office for Science, writes in a foreword.

But he adds: “The good news is that science has the potential to play an increasingly important role in DRR [disaster risk reduction].

“Science tells us why disasters happen and where many of the risks lie, and for some disasters we can even forecast when they will occur.”

A case study in the report, Reducing risks of future disasters, published last month by the Foresight Programme at the UK Government Office for Science, cites lessons from IFRC-run workshops in Senegal, later replicated in Ethiopia, Kenya, and Uganda, which brought together climate scientists, humanitarians and representatives of at-risk communities.

These led to “community requests for science-based flood warnings, improved…early warning of flooding from national meteorological agencies to humanitarians and community leaders, and improved understanding…of [the] climate information which at-risk communities require.”

Dialogue between users and providers of advance information on flooding was also key to a new system for forecasting monsoon floods along Bangladeshi rivers.

This led to “demonstrable improvements in preparedness at the national, district and community levels for two major floods which took place in 2007,” says Foresight.

Reducing risks of future disasters was peer-reviewed by the director of the Climate Centre, Dr Maarten van Aalst, who also attended a related international summit of senior policy-makers in June.

Buduz Samon, 40, a Bangladeshi fisherman, casts his net in a flooded river in 2007, when there were “demonstrable improvements” in preparedness thanks to advance information. (Photo: Jenny Matthews/British Red Cross)