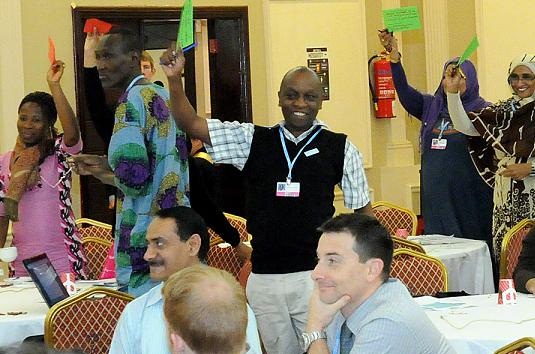 With the latest round of UN climate talks now into their second week in the Qatar capital, Doha, delegates were looking back on a highly successful 10th anniversary Development and Climate Days fringe event.

There is extensive coverage and photo streams here from the Earth Negotiations Bulletin (ENB) — the reporting service for environment and development negotiations.

D&C Days, which opened on Saturday morning with a “speed-networking” ice-breaker, focused on “innovative approaches and incisive dialogue for climate-smart development.”

Among the special educational games played was one that encouraged participants to think about the use of early-warning information in development decisions, then four groups worked on integrating climate services into development, addressing social exclusion, climate financing, and loss and damage.

The two-day event is the fruit of a partnership between the Climate Centre, the International Institute for Environment and Development (IIED) and CDKN.

It was begun by the IIED's Saleemul Huq at COP8 in New Delhi in 2002, and gathers policy-makers, scientists and development practitioners to debate the key theme of climate change adaptation that was then marginal to the main climate negotiations.

Adaptation has now become a key issue, however, not only in the UNFCCC itself but also in major plans, policies and programmes worldwide.

On Sunday morning in Doha there was a higher than expected turnout at the D&C Days Beyond the Film Festival – a thought-provoking selection of shorts, illustrating how different film-making techniques might spur action on climate change.

All 195 parties to the UNFCCC are attending COP18 in Doha, where they are reviewing the implementation of the convention and trying to promote its effective implementation.

Delegates at the D&C Days fringe event at COP18 get things underway last weekend by a speed-networking session. (Photo: IISD)