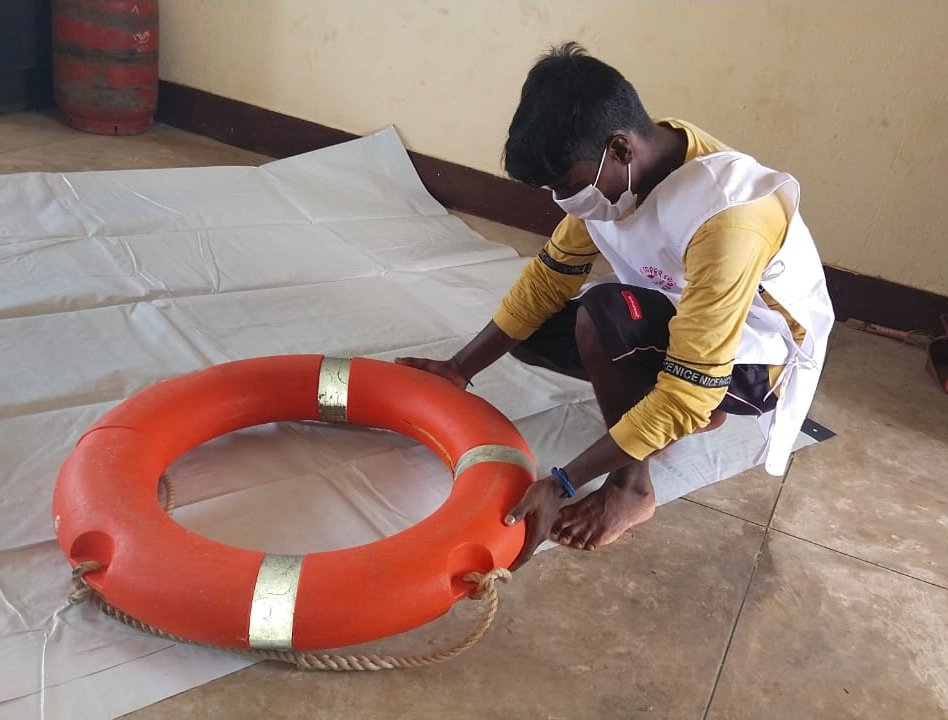 (This story is an IFRC press release, issued in Kuala Lumpur, Delhi and Dakar earlier today.)

Red Cross and Red Crescent teams are helping people stay safe in India and Bangladesh as a major cyclone threatens millions and devastating Covid-19 surges continue in both countries.

While India has been facing record Covid death-rates, the eastern Indian states of West Bengal and Odisha are bracing for Cyclone Yaas, the second major storm to hit the country in two weeks.

Udaya Regmi, IFRC South Asia Head of Delegation, said: “This cyclone spells double trouble for millions of people in India as there is no respite from Covid-19. The country is being slammed by a second major cyclone in two weeks and hitting areas where Covid infections and deaths have been at record highs.

“Indian Red Cross volunteers are working alongside authorities to support the safe evacuation of people who are in the direct path of the cyclone, preparing rafts in case of storm surges and flooding and relief supplies such as food rations.”

While Bangladesh has also been grappling with recent record Covid-19 infections and deaths, thousands of Bangladesh Red Crescent and Cyclone Preparedness Programme volunteers are urgently supporting people to be safe from the cyclone.

Feroz Salah Uddin, Secretary General, Bangladesh Red Crescent Society said: “More than 75,000 trained volunteers are ready to help in the coastal areas before, during, and after the cyclone. Sufficient cyclone shelters are ready so that people can maintain physical distance during evacuation.

“We have already updated our contingency relief stocks and mapped our existing response capacity to respond to this cyclone.”

In coastal areas of Bangladesh, thousands of people are still recovering after last year’s Cyclone Amphan, with over 100,000 still living in temporary shelters.

Sanjeev Kafley, IFRC’s Head of Bangladesh Delegation said: “We are taking every possible measure to prevent loss of life and reduce damage and suffering from this massive storm.

“Another big cyclone in India and Bangladesh is placing millions of lives in further jeopardy as people struggle to cope with this paralyzing pandemic.”

The IFRC has allocated US$ 250,000 from its Disaster Relief Emergency Fund to help the Bangladesh Red Crescent take early lifesaving action and provide immediate support to the most affected people following the storm.

Indian Red Cross personnel – like their colleagues in Bangladesh – helped distribute warnings this week as Cyclone Yaas, the second major storm to hit the country in two weeks, bears down on the Bay of Bengal coast. (Photo: IRCS via social media)