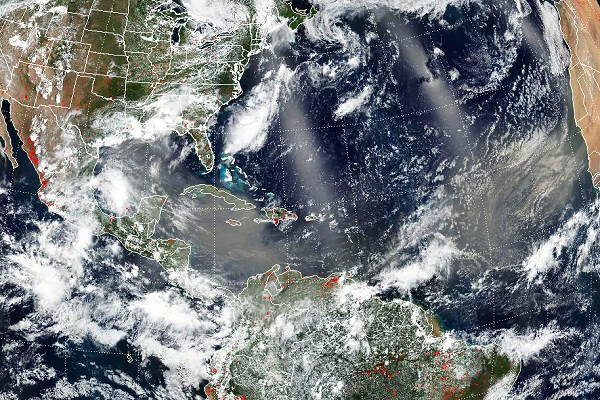 All key indicators in the State of the Global Climate 2020 report, issued by the WMO today, “highlight relentless, continuing climate change, an increasing occurrence and intensification of extreme events, and severe loss and damage, affecting people, societies and economies,” said Professor Petteri Taalas, Secretary General of the World Meteorological Organization.

The pandemic-related economic slowdown worldwide “failed to put a brake on climate change drivers and accelerating impacts,” the report says, while at 1.2°C above an 1850–1900 benchmark, 2020 “was one of the three warmest years on record, despite a cooling La Niña event.”

The State of the Global Climate 2020, from the WMO and its partners, comes shortly before this week’s two-day virtual summit on climate convened by the US.

Mr Guterres added: “Countries need to…submit, well ahead of COP 26 in Glasgow, ambitious national climate plans that will collectively cut global emissions by 45 per cent compared to 2010 levels by 2030.

“And they need to act now to protect people against the disastrous effects of climate change.”

Ocean acidification and deoxygenation have continued, “impacting ecosystems, marine life and fisheries,” according to a contribution from the Intergovernmental Oceanographic Commission of UNESCO, while EU’s Copernicus Marine Service said ocean warming over the past decade was higher than the long-term average.

For only the second time on record Arctic sea-ice after the summer melt shrank to less than 4 million square kilometres, it adds, with modern-era record monthly lows in July and October.

After record high temperatures north of the Arctic Circle in Siberia and a prolonged marine heatwave, the summer “sea-ice retreat…in the Laptev Sea was the earliest observed in the satellite era,” the WMO says, while the Greenland ice sheet continued to shrink.

“The Indian subcontinent and neighbouring areas, China, the Republic of Korea and Japan, and parts of South-East Asia also received abnormally high rainfall” while in the US “the largest fires ever recorded occurred in late summer and autumn.”

Australia broke heat records in early 2020, but summer drought and heatwaves in Europe were generally not as intense as 2018 and 2019.

The 2020 North Atlantic hurricane season had its largest number of named storms on record, 30, and a record 12 made landfall in the US, breaking the previous record of nine.

Cyclone Amphan, which made landfall in May near the India-Bangladesh border, was the costliest on record for the North Indian Ocean, while Typhoon Goni was one of the most intense landfalls on record in the Philippines.

Cyclone Harold had significant impacts in the northern islands of Vanuatu in April, affecting about 65 per cent of the population and also resulting in damage in Fiji, Tonga and the Solomon Islands.

Nearly 10 million people were displaced,
‘largely due to hydrometeorological disasters
in the first half of 2020, mainly in South
and South-East Asia and the Horn of Africa’

All of this and many other impacts helped subject more than 50 million people to the double hit of extreme weather and Covid-19, according to an IFRC report quoted by the WMO.

Cyclone Harold, for example, which struck Fiji, the Solomon Islands, Tonga and Vanuatu and was one of the strongest ever recorded in the South Pacific, displacing nearly 100,000 people but because of lockdown “response and recovery operations were hampered, leading to delays in providing equipment and assistance”.

The State of the Global Climate 2020 says that after a long period of improvement, the pandemic “crippled agriculture and food systems, inverting development trajectories and stunting economic growth.”

It adds that nearly 10 million people were recorded as displaced, “largely due to hydrometeorological hazards and disasters [in] the first half of 2020, mainly concentrated in South and South-East Asia and the Horn of Africa.”

“[W]hile the current global recession caused by the Covid-19 pandemic may make it challenging to enact the policies needed for mitigation, it also presents opportunities to set the economy on a greener path by boosting investment in green and resilient public infrastructure…”, an IMF contribution says.

Examples include “disaster-proof infrastructure and early-warning systems, risk-sharing through financial markets, and the development of social safety-nets”.

A NOAA satellite photo shows a cloud of dust from the Sahara desert in June 2020 blanketing the Caribbean, at a size and concentration that meteorologists said hadn’t been seen in half a century. It’s one of the phenomena used by the WMO to illustrate its latest State of the Global Climate report. (Photo: NOAA via NASA Global Climate Change)