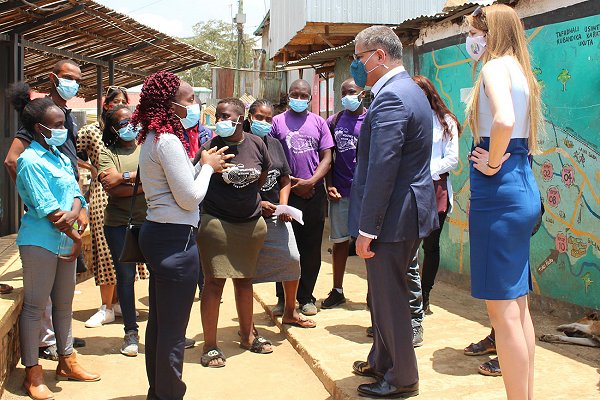 The UK yesterday hosted the online Climate and Development Ministerial meeting, gathering governments and other stakeholders to identify next steps on priority issues for climate-vulnerable communities ahead of COP 26 later this year in Glasgow.

A British government statement ahead of the meeting said it would centre on the key issues of responding to climate impacts, alleviating fiscal pressure on developing countries so they can better address them, and improving “the quantity, quality and composition of climate finance,” in particular for adaptation and resilience.

“We have heard time and again that a lack of solutions on finance, adaptation and debt are limiting climate action in the world’s most vulnerable communities,” COP 26 President Alok Sharma said in an opening address.

“But it is absolutely vital that we now break the inertia and find some solutions.”

He argued that communities most vulnerable to climate change understood the challenges better than anyone but were also suffering the most, having “done the least to cause the climate crisis”.

Mr Sharma added: “We also know there is a tangible ask from developing countries for a rebalancing of climate finance flows between mitigation and adaptation.

“We cannot continue with a situation where adaptation is the poor cousin of mitigation.

“You will have heard the UN Secretary General calling for a fifty-fifty split. All donor countries must consider what they can do to materially increase adaptation finance flows.”

Mr Sharma thanked “all countries and institutions who joined the round tables ahead of [the ministerial, and] the academics and representatives from civil society who have joined the workshops and made a critical difference in the shaping of this discussion.”

In February the Climate Centre jointly hosted an expert workshop on responding to climate impacts in support of the ministerial – the first of a series of four organized with the European E3G think tank, the International Institute for Environment and Development, and the World Resources Institute.

Describing climate finance as a key part of the ministerial’s agenda yesterday, UK Foreign Secretary Dominic Raab said the questions of implementing the Paris Agreement and recovery from the Covid-19 pandemic “are very clearly intertwined – so we need to tackle them together [and] the way forward must be to engineer a green recovery that delivers both for the people of this planet but also for ecosystems.”

UN Deputy Secretary-General of the Amina Mohammed told the meeting that the need to adapt and be resilient, was “a moral, economic and social imperative”, adding that it currently received just one-fifth of total climate finance.

A call on donors to increase financial support to climate adaptation by least 50 per cent in time for the G7 summit in June was first of the “concrete and achievable actions” identified by the UN, said Ms Mohammed, who is also Chair of the United Nations Sustainable Development Group.

She called for a significant scaling up of existing financial instruments designed to handle disasters, new instruments to incentivize the building of resilience, and better information on risk.

Ministers from 35 countries took part in yesterday’s ministerial meeting, including the US, the EU, and India, several least developed and vulnerable island states, and representatives of key international institutions, including the presidents of the World Bank and IMF.

Alok Sharma and the UK High Commissioner to Kenya, Jane Marriott, last week visiting a Kounkuey Design Initiative project in Nairobi to learn about its work to mitigate risk in informal settlements. He told yesterday’s ministerial that his recent travels to Kenya and six other countries had shown him that communities most vulnerable to climate change understand the challenges better and “are leaders when it comes to climate action.” (Photo: Tomorrow’s Cities via social media)