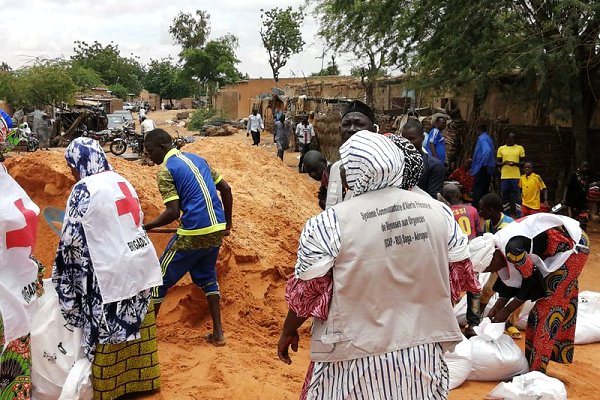 (This story appeared first on Monday on the SERVIR website.)

Disconnects between forecasters and decision-makers worldwide can often result in less efficient or effective flood response. In a paper published late last month, experts from SERVIR’s Science Coordination Office, the University of Alabama in Huntsville, NASA Headquarters, Columbia University IRI, and the Climate Centre provide suggestions to help ensure satellite data and forecasts are used to their full potential.

Despite the growing accessibility and reliability of disaster forecasting and early warning systems, inefficient disaster management persists around the world.

Some in the disaster science community have proposed a new programme design framework that ensures early actions are consistently triggered by trusted forecasts and scientific input.

“Increasingly, we are seeing emerging opportunities and innovations across the suite of Earth observations for improving how we understand and visualize a variety of different environmental risks,” says Shanna McClain, the Risk Reduction and Resilience Lead at NASA’s Earth Sciences Division and one of the authors.

“Strengths exist now in forecasting hydrometeorological hazards, but on the horizon we are likely to see much more diversity in what we can anticipate with confidence – from volcanic eruptions to pandemics.”

“Forecast-based Action” (FbA) programmes immediately trigger preparedness efforts when forecasts reach certain thresholds based on the probability and likely impact of an event. For example, sandbagging teams (photo) might be deployed if there’s above an 80 per cent chance of a location receiving more than two inches of rain in three days.”

The new article, published in the Journal of Applied Remote Sensing, provides suggestions for the Earth observations community to better support FbA efforts for flood management.

Satellite imagery can provide not only historical flood data from which to define the threshold conditions for early action, but also observations during a flood that help decision-makers evaluate whether those thresholds were sufficient.

When satellite imagery is paired with social and economic data, flood managers can define the threshold for action based on likely human impacts, rather than just magnitude alone. This enables FbA programmes that are more directly relevant to community and humanitarian concerns.

“It is incredible that we can learn so much about the world from space, from clouds to rain to the location of population centres” says Erin Coughlan de Perez, a climate scientist with the Red Cross Red Crescent Climate Centre.

“Earth observations can also help us understand the accuracy of our weather forecasts. This kind of accuracy information is critical to discuss with humanitarians, to ensure they make appropriate decisions given how well the forecasts work.”

Still, expanding FbA programmes is not without its challenges. When choosing how early a forecast to use, decision-makers must strike a difficult balance between waiting long enough to have a reliable prediction, and acting early enough to be effective.

The authors encourage sustained dialogue between the Earth observations community and humanitarian groups to ensure that all stakeholders understand how the forecasts are used and how those numbers translate to human impacts.

With collaboration between Earth scientists, humanitarian groups, and local agencies, the FbA framework has the potential to help flood-prone communities reach new levels of resilience.

“When it comes to collaboration, it can be hard to know where to begin,” says lead author Claire Nauman, a recent graduate research assistant with SERVIR.

“We hope, by bringing together voices from both the Earth observation and the humanitarian community, we can offer a starting place to seed conversations and spark new ideas to leverage Earth observations for FbA.”

Niger Red Cross volunteers last August used part of a new IFRC-DREF early action protocol to successfully reinforce part of the embankment holding back the flooded River Niger in the capital, Niamey. It’s the kind of action the authors of a new paper argue can be expanded with improvements in Earth observations. (Photo: CRN)

(Editor’s note: SERVIR is a joint initiative of NASA and the United States Agency for International Development, working in partnership with leading regional organizations to help developing countries use satellites and geospatial technologies for managing climate risks and land use. It helps decision-makers act locally on climate-sensitive issues such as disasters, agriculture, water, ecosystems and land.)