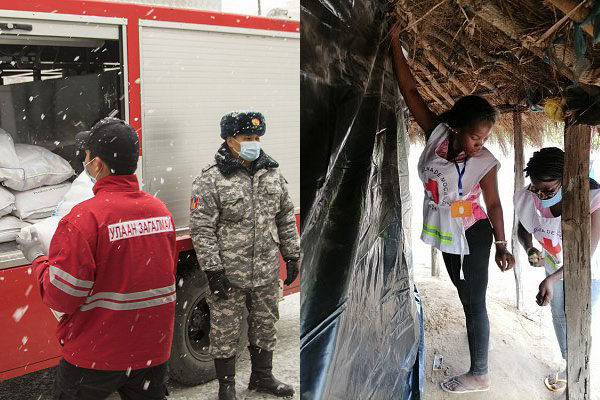 (This story is based on a press release and departmental text issued by the IFRC late last month.)

Last Monday, in anticipation of Cyclone Chalane’s landfall two days later and supported by the IFRC and the German Red Cross, the Mozambique Red Cross activated its recently approved early action protocol for cyclones with preparedness actions to reduce its impact.

“Our emphasis at this stage is on anticipation and not reaction,” said Jurg Wilbrink, Forecast-based Action Project Manager at the IFRC’s Southern Africa region. “Instead of waiting for the cyclone to hit, we are preparing for its impact.”

Red Cross staff and volunteers will have launched early warnings and supported reinforcing houses and public structures as well as putting strategic stock in place, to limit the potential damage…in targeted vulnerable communities.”

Early actions worth nearly US$ 300,000 included the supply and fitting (photo) of shelter-strengthening kits, and hygiene and Covid-related supplies.

‘This time around we are putting
everything into action. Early action’

“Red Cross volunteers will also be active in sharing potentially life-saving information, including the position of safe areas, medical help and key actions to take before landfall,” an IFRC press release issued in Maputo and Geneva said.

Janio Dambo, Forecast-based Financing Project Manager at the Mozambique Red Cross, added: “We were busy finalizing the details of the early-action protocol in Mozambique when Cyclone Idai hit [in 2019].

“At the time what needed to happen was being put down on paper. This time around we are putting everything into action. Early action.”

The MRCS will deliver cash assistance and livestock feed to 2,000 vulnerable herder households in the target areas to assist them in meeting their needs and saving their animals.

The operation, worth nearly US$ 350,000, will be completed within two months of the trigger date of 18 December and is being coordinated with the UN Food and Agricultural Organization which has activated its own early warning plan to support vulnerable herder communities.

A year ago almost to the day similar forecasts of an extreme winter in Mongolia triggered the first use of the DREF-based early-action funding mechanism anywhere in the world.