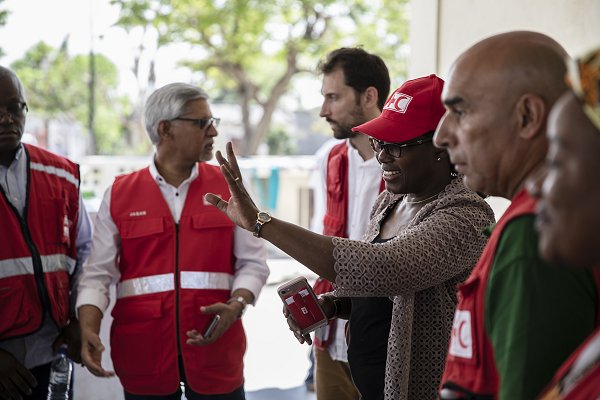 “It’s so important to invest in early warning and early action because all the analysis shows it provides the best cost-benefit ratio. It makes sense. It saves money. It saves lives. It saves livelihoods. And it also supports people in a dignified way.”

That was the heart of the argument for anticipatory humanitarian action presented by IFRC Secretary General Jagan Chapagain Monday at the disaster-management anchoring event at the Climate Adaptation Summit 2021 (CAS 2021).

Mr Chapagan said the IFRC was proud to be hosting the Risk-Informed Early Action Partnership (REAP), and he invited other summit participants to join the alliance whose core goal was to “make a billion people safer from climate risk by 2025”.

It was one of ten such anchoring events at CAS 2021, which included recorded statements from more than 30 heads of state and government, as well as contributions from UN agencies, the private sector, development banks, NGOs and humanitarian organizations.

These included the first major speech by the new US Climate Envoy, John Kerry, as well as contributions from UN Secretary General Antonio Guterres, and Chinese Vice-Premier Han Zheng.

The two-day virtual summit, which was organized by the Netherlands government and ended yesterday, was the first such high-level meeting entirely focused on climate adaptation.

The anchoring event on disaster management addressed “the urgent need to invest in people-centred early warning and early action with a focus on vulnerable populations in Africa, low-income countries and small-island developing states,” organizers said; it was jointly facilitated by the IFRC, REAP itself, the WMO, and the Climate Risk and Early Warning Systems initiative.

‘I think with everything we do,
we have to look from the climate angle.
Climate should not be a separate silo’

After an early warning is sounded, Mr Chapagain added, “it’s very important to engage the people we want to work with, to listen to them, to their information, and try to understand their needs.”

Secondly, local people needed to be part of the design process behind interventions – they knew the needs and the challenges, and “that’s when the response becomes relevant and effective.”

Thirdly, he said, citing the IFRC’s new early-action protocols, “we need to have mechanisms in place so that the funding and the resources can be released immediately, and preferably before the disaster strikes…

“I think with everything we do, we have to look from the climate angle. Climate should not be a separate silo but mainstreamed into our programmes to make them climate smart.

“We have to listen to the science; we have to take science very seriously.”

The IFRC Secretary General said it would be a “very big mistake” to cut investment in adaptation and early warning in any quest for economies post-pandemic.

On the contrary, it was “exactly situations like this where we have less resources that require reprioritizing investment in adaptation and early warning early action.”

Among the major initiatives rolled out or detailed at CAS 2021 this week were:

*The Race to Resilience platform for collective action on adaptation, to go alongside the 2019 Race to Zero, both originated by the UN Climate Champions.

*The UK-initiated Climate Adaptation Coalition, with Egypt, Bangladesh, Malawi, the Netherlands, Saint Lucia and the UN, to provide a forum for both developed and developing countries to explore climate solutions together.

*New principles for locally led adaptation adopted by 40 governments and other agencies, including the IFRC, to “to ensure climate adaptation is led by local people”.

*The 1,000 Cities Adapt Now initiative to tackle water issues, including those triggered by both storms and droughts, “using natural systems to protect urban areas from climate change impacts”.

“I’m thrilled that our mission to accelerate climate adaptation around the world is succeeding,” Netherlands Minister of Infrastructure and Water Management Cora van Nieuwenhuizen, one of the Dutch hosts, was quoted as saying yesterday.

“It’s incredible how much energy has come together at this summit. World leaders are announcing concrete and ambitious plans.

Additional IFRC contributions at the summit included a video by the French Red Cross on mental health and psychosocial support related to climate change, the Faces of Resilience exhibition by Partners for Resilience (which include the Netherlands Red Cros and the Climate Centre), and a video about the humanitarian impacts of the climate crisis prepared by the IFRC and the Inter-Agency Standing Committee.

IFRC Secretary General Jagan Chapagain (second from left) on a visit to Mozambique in April 2019, after Cyclone Idai. It’s one of the countries that has been prominent in work on early warning early action and forecast-based financing, and earlier this month the Mozambique Red Cross activated its recently approved early action protocol in anticipation of Cyclone Chalane’s landfall shortly afterwards. (File photo: Saara Mansikkamäki/Finnish Red Cross via IFRC)