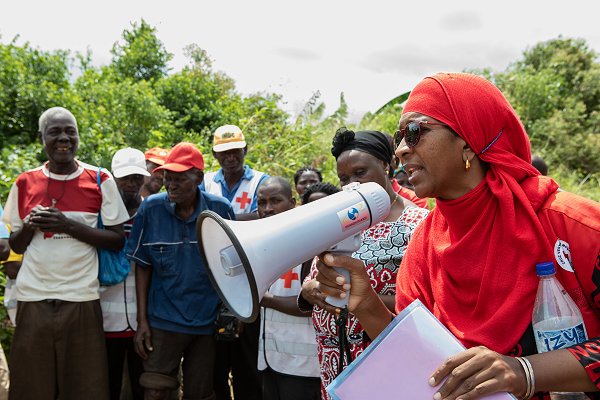 (This is a longer version of the story that appeared on the IFRC website earlier today; a story on its launch also appears on the Anticipation Hub website itself.)

Acting ahead of disasters reduces losses and suffering and protects lives and livelihoods – and now humanitarians and other actors have a new knowledge-exchange platform that can help them take their programmes to scale.

The new Anticipation Hub was created by the German Red Cross, the IFRC and the Climate Centre with funding support from the German Federal Foreign Office and was launched today as part of the online 8th Global Dialogue Platform on Anticipatory Humanitarian Action.

It is designed as a one-stop-shop for knowledge, learning and guidance on anticipatory action, and already has more than 60 partners across the Red Cross and Red Crescent Movement, governments, universities, research institutes, NGOs, UN agencies, and other networks.

“We have reached a stage where we don’t have to prove the relevance and effectiveness of anticipatory approaches,” said Thomas Zahneisen, Director of Humanitarian Assistance at the Federal Foreign Office.

“They save lives and mitigate humanitarian impacts more effectively, using less money, and are more dignified.”

Christof Johnen, Head of International Cooperation at the German Red Cross, added: “More. Better. Together. What’s important is to not only focus on the ‘more’ but as well on the better and together. It is our ambition that the Anticipation Hub will have a key role to play here.”

The hub aims to support effective anticipatory humanitarian action at a greater pace and scale, to reduce loss and suffering of communities ahead of disasters.

It includes an interactive global map on anticipatory action country by country, a database of project reports, publications and methodologies, and an overview of the various groups and networks engaged.

“We don’t have to prove the effectiveness of
anticipatory approaches. They save lives and
mitigate humanitarian impacts more effectively,
using less money, and are more dignified’

He said: “With the right early-warning systems in place, we have proven that acting early and working with communities ahead of a disaster reduces losses and suffering. We have seen this work first-hand in Uganda, Togo, Peru, Ecuador, Mongolia and Bangladesh.

“Thanks to the pioneering work of the German Red Cross and the Climate Centre, there are now 31 National Societies developing forecast-based financing as an anticipatory action approach.

“The IFRC is committed to scaling up forecast-based action through the Disaster Relief Emergency Fund…by investing in National Society capacities to reach more people, cover more places, and expand this approach to more types of hazards.”

Together with other initiatives such as the Risk-Informed Early Action Partnership, the hub is intended to promote lasting change through sustained policy and advocacy efforts to mainstream anticipatory approaches.

It will facilitate innovation, cross-fertilization of ideas and discussion via webinars, forums and working groups; it welcomes submissions and inquiries at anticipation-hub@drk.de.

The leader of the Mozambique Red Cross branch in Buzi speaks to local residents still struggling to get back on their feet a year after Cyclone Idai. The city is at the heart of one of four flood plains covered by the most recent early action protocol to be announced by the IFRC on 2 December. (Library photo: Anette Selmer-Andresen/IFRC)