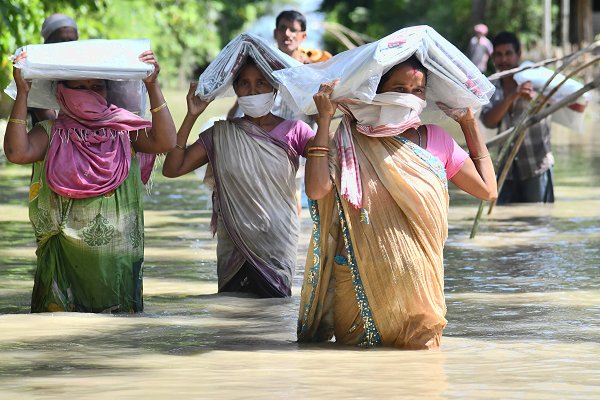 (This story is a press release issued by the IFRC in Geneva earlier today.)

Global efforts to tackle climate change are currently failing to protect the people most at risk, according to a new analysis by the IFRC.

The IFRC’s World Disasters Report 2020: Come Heat or High Water shows that the countries most affected by climate-related disasters receive only a fraction of the funding available for climate change adaptation and thus struggle to protect people from the aggravating effects of climate change.

IFRC’s Secretary General Jagan Chapagain said: “Our first responsibility is to protect communities that are most exposed and vulnerable to climate risks.

“However, our research demonstrates that the world is collectively failing to do this. There is a clear disconnection between where the climate risk is greatest and where climate adaptation funding goes. This disconnection could very well cost lives.”

‘Climate adaptation work can’t take a back seat
while the world is preoccupied with the pandemic:
the two crises have to be tackled together’

The failure to protect the people most vulnerable to climate change is especially alarming given the steady increase in the number of climate and weather-related disasters.

The average number of climate and weather-related disasters per decade has increased nearly 35 per cent since the 1990s, according to the World Disasters Report.

Over the past decade, 83 per cent of all disasters were caused by extreme weather and climate-related events such as floods, storms, and heatwaves. Together, these disasters killed more than 410,000 people and affected a staggering 1.7 billion people.

World Disasters Report also argues that the massive stimulus packages that are currently being developed around the world in response to the Covid-19 pandemic are an opportunity to address and reduce climate vulnerability.

A recovery that protects people and the planet would not only help to reduce today’s risks but would also make communities safer and more resilient to future disasters.

Smart financing – with a focus on early warning and anticipatory action to reduce risks and prevent disasters before they happen – and risk reduction measures would both play a major role in protecting the most exposed communities.

Mr Chapagain said: “Climate adaptation work can’t take a back seat while the world is preoccupied with the pandemic: the two crises have to be tackled together.

“These disasters are already on the doorstep in every country around the world. We must significantly scale up investment in climate-smart actions that strengthen risk reduction and preparedness, alongside climate-smart laws and policies.

“With challenges like these, international solidarity is not only a moral responsibility, but also the smart thing to do.

“Investing in resilience in the most vulnerable places is more cost-effective than to accept continued increases in the cost of humanitarian response, and contributes to a safer, more prosperous and sustainable world for everyone.”

People wade through flood waters carrying tarpaulins provided by the Indian Red Cross in Guimari village, Assam. The IRCS got through to the remotest areas to support communities reeling under the impact of devastating floods, which affected at least 5.6 million people in the state and a further 6 million elsewhere in the country. The picture illustrates this year’s World Disasters Report from the IFRC, which says global efforts to tackle climate change are currently failing to protect those most at risk. (Photo: Biju Boro/IRCS via IFRC)