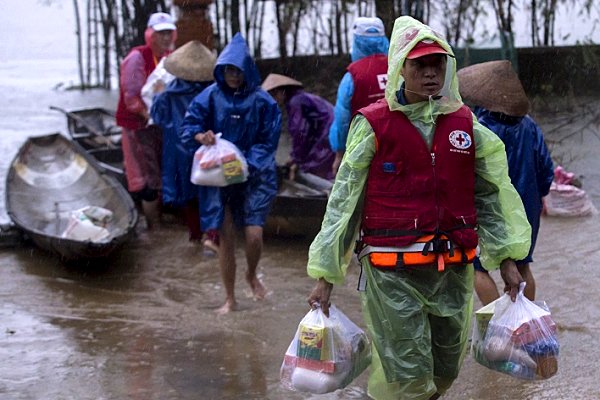 (Vietnam’s recent struggle against a back-to-back series of deadly floods and storms can be tracked through four press releases issued by the IFRC in Hanoi, Kuala Lumpur and Geneva last month.)

Scientists with the World Weather Attribution group last week agreed to conduct a detailed study of the extreme rainfall in Vietnam, largely the result of tropical storms, that reports say has now disrupted the lives of some 1.5 million people.

The work was getting underway this week with “event definition” – the precise setting of the parameters in space and time of the rainfall episode being studied and the data associated with it; the scientists’ conclusions on the extent to which human-induced climate change has had a hand in the latest extreme-weather event to hit Vietnam are expected in about a month.

Earlier studies of extreme rainfall by the WWA group included, last year, Tropical Storm Imelda in Texas, extreme seasonal rainfall in Japan and the Indian state of Kerala in 2018, and the 2017 floods in Bangladesh.

Typhoon Molave was the most recent storm to make landfall in central Vietnam last week, the ninth this year, and it followed weeks of torrential rain and landslides.

The government said more than 50 people had been people buried and were feared dead in at least two landslides caused by the storm, which worsened existing floods in central areas while causing fresh flooding in areas that included the Central Highlands near the border with Laos.

‘The people of Vietnam are tough,
but this is among the worst destruction
ever seen in many areas’

“We are heartbroken by more tragic loss of life as this typhoon has brought further misery and hardship to hundreds of thousands of people,” Vietnamese Red Cross Society President Nguyen Thi Xuan Thu told the IFRC.

“Red Cross relief teams are working non-stop to rescue people and provide critical relief as hundreds of thousands of lives have been turned upside down, with so many homes and livelihoods devastated in this massive storm.”

The IFRC said last Thursday that more than over 700 communities had been left without power by Molave, while crops and water supplies had been damaged or destroyed in areas “already reeling from some of the worst flooding in decades”.

Nguyen Hung Ha, the IFRC’s Bangkok-based Programme Coordinator, said: “This massive storm is another crippling blow to millions of people already struggling to cope with some of the most dangerous floods on record in central Vietnam.

“Relief teams are stretched to the limit due to these back-to back storms. We must redouble our efforts to get critical…food, drinking water, tarpaulins and blankets to all those who need it.”

The IFRC has launched an emergency appeal for nearly 4 million Swiss francs for relief and recovery for 160,000 Vietnamese people, on top of a DREF grant of 500,000 CHF to support local emergency efforts.

The IFRC appeal text says the Hieu, Bo, Gianh and Kien Giang rivers all “reached historically high levels, and in some locations floodwaters exceeded the previous historical highs recorded in 1979 or 1999”.

It’s estimated now that at least 150,000 people are at immediate risk of food shortages, with thousands of hectares of crops destroyed and more than 2 million cattle and poultry swept away.

“The people of Vietnam are tough, but this is among the worst destruction ever seen in many areas,” Nguyen Thi Xuan Thu added.

“The relentless storms and flooding are taking a devastating human toll, further destroying livelihoods and isolating millions of people.”

Nguyen Dang Tinh, who heads the Vietnamese Red Cross in Hai Lang district, arrives at Cau Nhi village with much-needed food. A lot of relief is being carried on foot through flooded areas in order to reach victims. (Photo: Yen Duong/IFRC)