As disaster train gathers speed, efforts gear up to clear the track 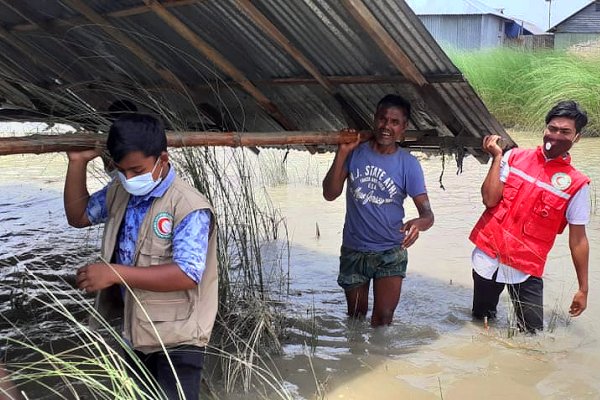 (This story appeared first last week on the website of the Thomson Reuters Foundation. It has been edited here for time references and length.)

When forecasts of severe flooding on Bangladesh’s Jamuna River came through in early July, UN aid officials did not just wait and hope for the best, as they might have done in the past.

Drawing on US$ 5.2 million released by the UN Central Emergency Response Fund (CERF), they started making cash payments of just over US$ 50 to about 30,000 households expected to be in harm’s way.

The money aimed to allow families to spend on whatever they believed would protect them most from the impending flood waters, from food and medicine to transport and clothing.

Thousands of farmers also were given sealable drums in which to safely store their seeds and farming tools, as well as feed for their animals at evacuation centres.

About 15,000 women, girls and transgender people were provided with kits to support their sexual and reproductive health, including flash-cards with Covid-19 precautionary measures and helpline numbers to report violence and receive advice.

“Acting early is cheaper, more effective and more humane,” UN humanitarian chief Mark Lowcock told an event last week on a push to provide aid ahead of disasters, which has garnered growing interest and funding from governments in the last couple of years.

Such a shift away from simply responding after a disaster occurs – which is far more common and costly – could help fraying aid budgets go further and assist more people as climate change fuels more frequent and damaging disasters globally.

The allocation of money before the floods hit in Bangladesh, affecting more than 5 million people, was the first time the CERF had been used for this kind of forecast-based financing, but is unlikely to be the last.

“There are very few problems humanitarian organizations deal with that you don’t get some notice of,” except for earthquakes, when alerts come only seconds ahead, Lowcock said.

For most weather and climate threats that can cause humanitarian disasters, including droughts, storms and floods, modern forecasting systems can now give advance warning of at least a few days or weeks in many parts of the world.

But simply having a forecast in hand at a national meteorological office is not enough, unless government officials and others can alert citizens and keep them safe.

One in three people worldwide are still not adequately covered by early warning systems, with Africa facing the largest gaps, said a report on climate services released by the World Meteorological Organization (WMO) and other agencies this month.

“Being prepared and able to react at the right time, in the right place, can save many lives and protect the livelihoods of communities everywhere,” said WMO Secretary-General Petteri Taalas.

Over the past 50 years, the number of disasters has increased fivefold and economic losses have jumped by a factor of seven as climate change worsens extreme weather, the report said.

But the average death toll recorded for each disaster has fallen by a third, partly as governments have improved their ability to evacuate people, it noted.

In 2018, about 108 million people needed international aid as a result of storms, floods, droughts and wildfires. But by 2030, that number could increase by almost 50 per cent, pushing climate-related humanitarian costs up to about US$ 20 billion a year, the report warned, citing Red Cross Red Crescent figures.

Advances in forecasting technology meant there was now little excuse to respond only after a disaster hit, he said.

“When you see a train approaching, you need to get off the tracks,” he told the Thomson Reuters Foundation.

“It’s not ethically justifiable to wait until people are struggling when we know that this will happen.”

But putting in place early warning systems on which governments, aid organizations and communities can act effectively takes two to three years, and requires a lot of work to coordinate funding, ministries and people, he added.

UN and Red Cross Red Crescent leaders conceded at this week’s event that agencies dealing with emergencies and those tackling longer-term poverty had often operated separately.

WFP chief David Beasley said that made no sense to people suffering hunger or disease, urging aid groups and donors to be more flexible in how they fund and deliver assistance.

“The people on the ground, they don’t care what you call it – just give us solutions so that [we] no longer need that outside support,” he told the discussion.

Besides providing food aid, the WFP is now doing things like building up food stocks ahead of droughts and floods, digging wells and helping communities capture and use rainwater for crops by restoring land, he noted.

Programmes to support “early action” are now being gradually ramped up in more than 50 countries across Africa, Asia and Latin America.

The Red Cross Red Crescent, which has pioneered the approach in the past five years, is involved in about half of those.

In Southern Africa, for example, it is ready to provide forecast-based financing when needed in seven countries for a varying combination of cyclones, floods and droughts.

The money will go to disaster-vulnerable poor communities – for instance in parts of Zambia where flooding often follows drought, wiping out crops.

In the tiny nation of Lesotho, meanwhile, the system will be used to anticipate and reduce the effects of drought, and eventually help mountain-dwellers prepare for heavy snow.

Maarten van Aalst, director of the Red Cross Red Crescent Climate Centre, said governments in vulnerable countries needed support to build systems to create effective early warnings, get them to communities in harm's way and act on them.

The argument for putting in place such systems is even more compelling at a time when risks – from climate change to pandemics – are rising fast, and funding is under pressure because of Covid-19 disruptions to economies, he said.

“We will be facing increasing challenges in a time of constrained finance [so] we need that investment to go to solutions that will be effective,” and that make communities and societies more resilient as a whole, he said.

WFP’s Laganda said this year’s anticipatory action in Bangladesh and an earlier project in Nepal showed the approach is a smart way to use money.

A 2015–2019 programme to provide protection ahead of floods in 14 districts of Nepal resulted in a 50–60 per cent reduction in damages, saving US$ 34 per $1 invested, as there was less need for a costly response.

Bangladesh Red Crescent volunteers assist people affected by the 2020 monsoon flooding. Anticipatory funding from the IFRC and other humanitarian agencies helped evacuate people from the most at-risk communities with their assets and livestock and provide cash grants. (Photo: BDRCS-GRC)