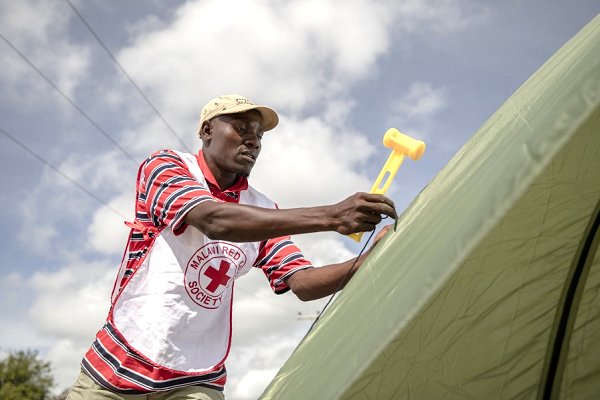 (This story is a press release issued yesterday by the IFRC in Pretoria to mark International Disaster Risk Reduction Day; it has been edited here for length. FbF is being implemented by seven of the ten National Societies coordinated by the IFRC Southern Africa – eSwatini, Lesotho, Malawi, Mozambique, Namibia, Zambia and Zimbabwe – for cyclones, floods or droughts.)

In Southern Africa, remarkable efforts have been made by regional bodies, governments and organizations to issue early-warning information and alerts to relevant government departments, concerned organizations and the public.

However, there has been very little effort to facilitate the translation of these warnings into early actions and informed early decision-making, until now.

“Whereas traditional disaster response is based on damage-limiting reaction to weather-related hazards, forecast-based financing (FbF) focuses on anticipating them with the help of scientific data and research,” said IFRC Southern Africa head Dr Michael Charles.

“The Red Cross Red Crescent Movement is a pioneer in the area of disaster management. With FbF we continue along this path, but instead of responding only, we now anticipate adverse events, and provide humanitarian assistance accordingly. It’s a real game-changer for us.”

Countries in southern Africa are recurrently affected by natural extreme events which have become part of people’s lived reality. But the way the events are impacting on vulnerable communities is changing along with climate change and as a lead actor in the humanitarian sector, the Red Cross Red Crescent Movement is looking at ways to respond to these changes quicker, earlier and with more flexibility.

“We need to adapt and be more flexible, quicker and earlier to reduce the humanitarian impact of these disasters,” says FbF Project Manager Sebongile Hlubi of the Lesotho Red Cross Society.

“The FbF model helps us Red Cross National Societies to build capacities and respond more effectively facing the prospect of floods, cyclones, tropical storms and cold and heatwaves in the region.

“In Lesotho we will use FbF to anticipate and mitigate the effects of drought and are hoping to eventually use this model to help those communities cut off by snow in the mountains to prepare for what many know is inevitable, but few have the means to prepare for.”

‘The Red Cross Red Crescent Movement
is a pioneer in the area of disaster management.
With FbF we continue along this path’

The model being rolled out by the IFRC and partners in Southern Africa has been developed by the German Red Cross since 2015 and refined and improved in the last five years based on in-country experiences in various parts of the world.

It means a major paradigm shift for the humanitarian world away from responding to a disaster to anticipating its imminent occurrence.

The FbF model has only been possible because of significant innovations in climate and weather data collection, and the accuracy with which we can predict what kind of event will take place, how intense the event is likely to be, and most importantly, where the event will likely cause the most damage.

This tends to be among already poor or marginalized communities, or communities who have to deal with more than one disaster in a season – for example, parts of Zambia where flooding is known to follow drought in certain areas, wiping out whatever crops communities were able to nurture during the dry season.

Research shows that investing in disaster preparedness and early action has a cost-benefit in terms of reducing both the humanitarian and financial footprint of natural extreme events.