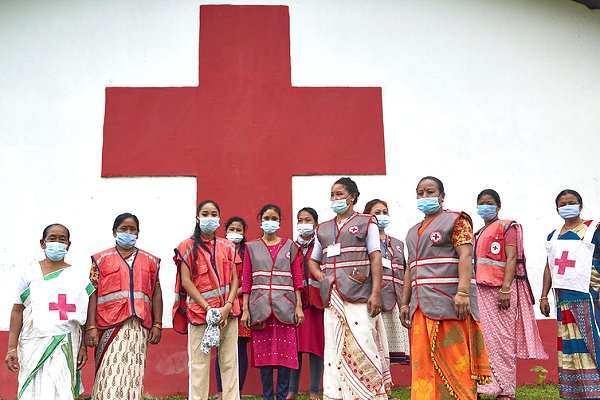 (The photos from Bangladeh and India used in the Vice Media story can be downloaded from the IFRC’s shaRED platform and from the Climate Centre’s Flickr site, along with others from the same locations in he two countries.)

In the first collaboration of its kind this year, the Vice Media group late last month published a special feature and photo story on the multiple crises now estimated by the IFRC to be affecting some 25 million people in South Asia.

Some of the worst floods in decades in Bangladesh followed Cyclone Amphan in May that itself caused widespread devastation there and in India – all combining with the Covid-19 pandemic that are together presenting Red Cross and Red Crescent volunteers with “the most difficult circumstances they have ever faced,” the IFRC said.

Thousands of villages have been submerged for months in Bangladesh, which has seen three devastating monsoon flood seasons in the past four years.

In the Indian state of Assam, nearly 6 million people are now reeling under the impact of a third wave of floods across the state, Vice Asia reported.

The IFRC has twice provided early-action emergency cash to National Societies (Early action key as South Asia copes with four crises in one year), helping more than 35,000 people most at risk to evacuate safely and recover faster.

Such “forecast-based action is also being embraced by the United Nations and other agencies as a critical step to address the growing needs of millions of people at the mercy of climate disasters,” the IFRC’s own multimedia story on the South Asian crises said.