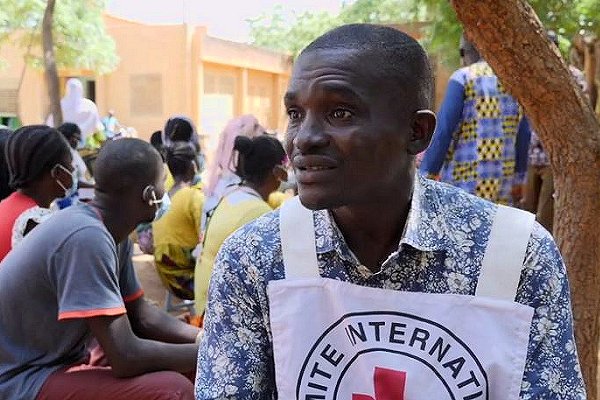 (This story is an ICRC statement issued yesterday in Geneva in English and French, together with b-roll video.)

While Covid-19 dominates the headlines in most parts of the world, there has been no let-up in the armed conflicts in the Sahel. In fact, there has been a rise in incidents of armed violence, resulting in mass population displacement.

In Burkina Faso alone, the number of internally displaced people has now topped the 1 million mark, doubling the figure recorded in July 2019.

The city of Kaya, which lies 100km north-east of Ouagadougou, illustrates the extent to which the humanitarian situation has deteriorated. And to complicate matters further, ten days ago, heavy rain caused floods in the area.

This part of Burkina Faso is one of the areas currently in the grip of armed conflict. Rising insecurity has led to the displacement of large numbers of people seeking safety in towns and cities.

In Kaya, the main city in the Centre-Nord Region, the local population of 130,000 has been swelled by the arrival of 100,000 displaced people, who are living in four temporary camps, some in makeshift shelters.

Fati Soré is from Pensa, a village located some 90km away. “Before, we farmed our land and raised our livestock. We made a living,” she explains.

She would have met a very different fate had it not been for the generosity of the local people. “Thank God the people of Kaya welcomed us with open arms, with dignity,” she concludes.

Growing insecurity has caused five health centres in the Kaya area to close their doors in the midst of the Covid-19 pandemic which has left the health system in disarray.

In response to this situation, the ICRC, in collaboration with the health authorities, decided to bolster the capacity of a health centre that was still open, restoring its facilities and providing medicines, beds, a tricycle ambulance and training for health-care workers.

As a result, between April and July the ICRC supported the delivery of care to over 20,000 people.

Health needs are now so great that the Kaya health facility is providing care to eight times the usual number of patients. Some of the people working there have been drafted in from elsewhere.

A number of nurses and doctors who were forced to leave their facilities in areas affected by violence are now working at this health centre.

There is a constant stream of patients, and most of them come from far away. Over 80 per cent of the patients are displaced people.

Burkina Faso has also been hit by heavy rain, which has affected over 7,000 people, according to the authorities. Kaya was not spared, with 1,440 people, including 880 internally displaced people, suffering the effects.

Three displaced people lost their lives, two of them when houses collapsed onto their shelters.

“The political and security crisis continues to unfold. The armed conflict between different groups continues to rage. There are visible signs of climate change at practically every turn in this environment,” said ICRC President Peter Maurer, who has just completed a five-day visit to Niger and Burkina Faso.

“You can also see how the structural poverty that has long plagued the people of the Sahel compounds these problems. And then there is Covid-19 which has perhaps hit the region as an economic crisis rather than a health crisis.

“These problems collide, producing a huge fallout and sparking a humanitarian crisis of the highest order.”

In view of these needs, the ICRC recently allocated close to 8 billion CFA francs (12 million Swiss francs) on top of its operational budget for the Sahel region. These extra funds will be used to strengthen protection for civilians, provide essential services and assist communities in rebuilding their livelihoods.

The ICRC’s Dr Boukari Sorgho says one of the problems in Kaya is that there is not enough water even for the city’s own residents, and when internally displaced people put additional strain on the supply that is a further issue. “It is crucial to facilitate the work of community health workers and medical transportation services and ensure respect for all health-care facilities.” (Video still: ICRC)