‘Incredibly inspiring’ Climate:Red Summit closes with a princess and a king (of bhangra) 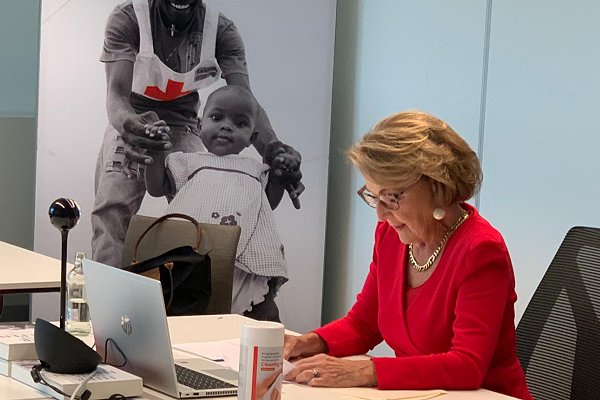 IFRC Secretary General Jagan Chapagain yesterday thanked the Norwegian, Finnish, Italian and British Red Cross and Climate Centre core organizers for their support to the Climate:Red Summit, which ended with a closing panel that included Princess Margriet of the Netherlands (photo).

He also thanked the Al Jazeera network which had helped with media profile and technical capacity, as well as all external partners and speakers, moderators, volunteers and the IFRC secretariat staff who made it possible (video summary).

Mr Chapagain described the summit, which drew some 10,000 participants from all the countries of the world, including the public, as “incredibly inspiring and energizing”.

It had been possible, he said, to “really feel the passion and energy that the Red Cross Red Crescent has injected into climate action”, all done virtually without a single flight. “Over the past 30 hours we have been experiencing the future.”

Mr Chapagain added that “to bring something like this summit into being has taken a phenomenal amount of work behind the scenes,” a similar effort, if not more, than would have been required than for a live event in an auditorium.

Echoing what Britain’s Prince Charles had said on the first day, he added, it was now the staff and volunteers of National Societies that “we look to as the real work begins of turning strategy, commitment and pledges on climate into action on the ground.”

‘We may not be able to prevent disasters
from happening, but we can prevent
the consequences when they strike’

Princess Margriet was joined on the closing panel by the Chair of the Pakistan Red Crescent Society, Abrar Ul Haq, who is also known as Pakistan’s “king of bhangra”.

He told the online audience that with Pakistan a “direct victim” of climate impacts, “there is a huge potential that we can actually create the desired impact with the support of [performing] artists.”

The summit finally closed with a live song from the PRCS chair that was quickly posted on Facebook.

In her address, Princess Margriet said: “I strongly believe that the shift to more prevention is essential. If we don’t do that, we continue to fight a running battle – one that we cannot keep up.

“We may not be able to prevent disasters from happening, but we can prevent the consequences when they strike: less damage, less people on the road, less suffering.

“The measures are not complicated. Early warning, evacuation plans, check dams and bridges, safe houses, schools, and shelter, uninterrupted water supply, taking good care of ecosystems, and, crucially, working with the local community, helping them to become resilient so they can cope with the risks…It saves many lives and it makes maximum use of donations.”

Princess Margriet also paid tribute to the engagement of young people with the climate issue, telling a Q&A session that the example set by another panel member, Sofia Hernandez, of the Costa Rican branch of the Fridays for Future school strike movement, was what gave her hope.

The climate movement itself started a long time ago with indigenous communities who “are the real protectors of the earth”, said Ms Hernandez, but now young people were involved in climate diplomacy at higher levels, right up to the “huge participation of youth at COP 25 last year.

“We saw how youth got together to lobby, and at the end maybe the COP wasn’t what we expected – we saw a lack of ambition [from governments] – but we also see that the climate movement is now led by youth.”

A further panel member was Krista Mikkonen, Finland’s Minister of the Environment and Climate Change, who said that in her country young people especially had been very active, and she too wanted to thank them.

She warned, however, that “we must be honest here, we are not on the right track. We are still lagging behind and we have a lot of work to do, but I do see plenty of signals that this is fast changing. And that gives me a hope.

“When I started in politics 25 years ago, I felt very lonely when I was talking about environmental questions, climate change, biodiversity loss…

“Now climate policy is something all governments, cities, businesses, and organizations are taking into account. We also have very active civil society which is demanding more emphasis on climate policy and more action.”

A written message to the closing discussion, which was moderated by Al Jazeera’s Sandra Gathmann, came from Debra Roberts in South Africa, co-chair of the IPCC’s Working Group II: “The science is clear, the evidence compelling, the consensus undeniable. Every half a degree of global warming makes poor people poorer, sea-levels higher, and biodiversity more threatened.

“But the science is also clear that we can change [humanity’s trajectory] through ambitious adaptation and mitigation action.

“This will require rapid, far-reaching an unprecedented transitions in four key global systems: cities, land, energy, and industry, but the window of opportunity to affect this change is narrowing.”

Taking place over 30 hours to facilitate participation in all time zones, Climate:Red included 200 side-events, more than 40 of which were facilitated by the Climate Centre, covering the entire range of the IFRC reference centre’s work.

“A critical feature of many sessions was people from different countries and backgrounds making new connections, including young people at the front line of rising risks talking to leaders, experts and indeed royalty, producing invaluable reflections and inspiration to take concrete action on climate.”

Tremendous thanks, he added, were owed to the IFRC’s Shaun Hazeldine, its Head of Innovation and Foresight, and the Solferino Academy team, “the people behind Strategy 2030, an inspiration to Federation leadership, and a seamless fit with the spirit in our Climate Centre.

“We envisaged this summit together last year, well before Covid-19, and it’s been an incredible journey.”

Princess Margriet of the Netherlands Thursday speaks from The Hague on the closing panel of the Climate:Red Summit. She suggested that much can be done to limit the impact of climate-related disasters, and “the measures are not complicated”. (Photo: Netherlands Red Cross)